To control an epidemic, authorities will often impose varying degrees of lockdown. In a paper in the journal Chaos, by AIP Publishing, scientists have discovered, using mathematics and computer simulations, why dividing a large population into multiple subpopulations that do not intermix can help contain outbreaks without imposing contact restrictions within those local communities.

"The key idea is that, at low infection numbers, fluctuations can alter the course of the epidemics significantly, even if you expect an exponential increase in infection numbers on average," said author Ramin Golestanian.

When infection numbers are high, random effects can be ignored. But subdividing a population can create communities so small that the random effects matter.

"When a large population is divided into smaller communities, these random effects completely change the dynamics of the full population. Randomness causes peak infection numbers to be brought way down," said author Philip Bittihn.

To tease out the way randomness affects an epidemic, the investigators first considered a so-called deterministic model without random events. For this test, they assumed that individuals in each subpopulation encounter others at the same rate they would have in the large population. Even though subpopulations are not allowed to intermix, the same dynamics are observed in the subdivided population as in the initial large population.

If, however, random effects are included in the model, dramatic changes ensue, even though the contact rate in the subpopulations is the same as in the full one.

A population of 8 million individuals with 500 initially infected ones was studied using an infectious contact rate seen for COVID-19 with mild social distancing measures in place. With these parameters, the disease spreads exponentially with infections doubling every 12 days.

"If this population is allowed to mix homogeneously, the dynamics will evolve according to the deterministic prediction with a peak around 5% infected individuals," said Bittihn.

However, if the population is split into 100 subpopulations of 80,000 people each, the peak percentage of infected individuals drops to 3%. If the community is split up even further to 500 subgroups of 16,000 each, the infection peaks at only 1% of the initial population.

The main reason subdividing the population works is because the epidemic is completely extinguished in a significant fraction of the subgroups. This "extinction effect" occurs when infection chains spontaneously terminate.

Another way subdividing works is by desynchronizing the full population. Even if outbreaks occur in the smaller communities, the peaks may come at different times and cannot synchronize and add up to a large number.

"In reality, subpopulations cannot be perfectly isolated, so local extinction might only be temporary," Golestanian said. "Further study is ongoing to take this and suitable countermeasures into account." 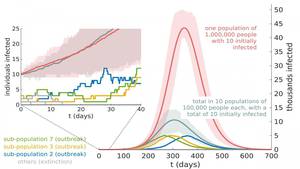