A new way to spot melanoma cells circulating in the blood has the potential to significantly improve the monitoring of cancer patients and guide future treatment.

Edith Cowan University's Melanoma Research Group, in collaboration with Harvard Medical School and clinicians at Western Australian hospitals, has pioneered a new technique to detect circulating tumor cells (CTCs) that could provide a new avenue for cancer diagnosis and therapies.

This work builds on the continued success of the Melanoma Research Group, who developed the world's first blood test capable of detecting melanoma in its early stages.

"These preliminary findings are a first step towards a new way to stop melanoma from spreading around the body," Professor Gray said.

"Cancer spreads around the body when CTCs shed from the primary tumor and travel through the blood to form secondary tumors (metastases) in other organs.

"If we can find a way to reliably detect these cells, then we have a chance to stop melanoma in its tracks with a powerful diagnostic tool and perhaps opportunities for therapies in the future."

Until now Melanoma CTCs have proved to be incredibly elusive, with detection rates wildly varying from 40 to 87 per cent.

Professor Gray said this ECU-led research has explained why CTCs have been so hard to find.

"We now understand that CTC detection cannot be resolved with a one-size-fits-all approach," she said.

"There is a huge amount of variety in the shape and bioactivity of these CTCs and so they all look different and respond differently to assay tests.

"To complicate things further, melanoma CTCs are hidden among thousands of other cells and matter in blood. Within one millilitre of blood, there are often fewer than 10 cancer cells among one billion red cells and one million white blood cells.

"It is much like finding a needle in a haystack."

Armed with a better understanding of the complexity of the task, the researchers tried a multifaceted approach to detecting melanoma CTCs.

"By combining three assays together, we raised detection rates to 72 per cent, which was a significantly and consistently higher result than using one test," Dr. Gray said.

"We are confident this approach is a move towards the reliable detection of CTCs, but we now need to tweak the assay to include a better combination to capture the broadest range of CTCs."

The ECU Melanoma Research Group is now working with artificial intelligence experts to fast-track the identification of CTCs. 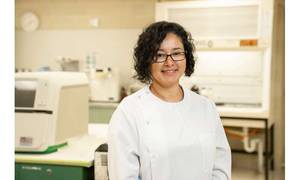 Primary HPV Screening & Genotyping in a 26-Year-Old Woman
UP NEXT...
The CAM Guide to Cancer: An Integrative Approach to Prevention, Treatment, and Healing
CME