Despite consuming fewer sugar-sweetened beverages and more whole grains, most American children and adolescents still eat poorly – and sociodemographic disparities persist, according to an 18-year national study between 1999 and 2016 of U.S. children’s dietary trends.

Led by Junxiu Liu and Dariush Mozaffarian of the Friedman School of Nutrition Science and Policy at Tufts University, the study is published today in JAMA. The research team analyzed the diets of more than 31,000 U.S. youth, 2-19 years old, based on national data across nine cycles of the National Health and Nutrition Examination Survey (NHANES) between 1999 and 2016. They assessed each child’s diet as poor, intermediate or ideal, based on three validated dietary scores, all of which are designed to measure adherence to accepted nutritional guidelines.

The study finds that a majority — 56 percent — of American children and adolescents had diets of poor nutritional quality in 2016. This was despite improvements over the 18-year study period including:

“This is a classic ‘glass half full or half empty’ story,” said Mozaffarian, dean of the Friedman School and senior author of the study. “Kids’ diets are definitely improving, and that’s very positive. On the other hand, most still have poor diets, and this is especially a problem for older youth and for kids whose households have less education, income, or food security.”

When the study authors investigated the influence of individual foods and nutrients, they discovered that improvements between 1999 and 2016 amounted to the daily equivalent of:

“Overall, added sugar intake among American children was reduced by a third, largely because sugary beverages were cut in half,” said first author Junxiu Liu, a postdoctoral scholar at the Friedman School. “But, there was little reduction in added sugars consumed from foods, and by 2016, American kids were still eating about 18 teaspoons or about 71.4 grams of added sugar each day – equivalent to one out of every seven calories. That’s much too high.”

The researchers found that while intakes of some healthful foods increased, they remained far below general national recommendations. By 2016, Mozaffarian noted, kids were eating:

The team also found that children’s salt intake increased and continued to greatly exceed the recommended daily amount, possibly due to more reliance on processed foods and foods prepared away from home.

The authors point out that several national policy efforts to improve the diets of American children during the study period could have contributed to progress, yet children also continue to be marketed foods with low nutritional value. “Food is the number one cause of chronic illness and death in our country, and these results affect our children—our future,” Mozaffarian said.

“Our findings of slowly improving, yet still poor, diets in U.S. children are consistent with the slowing of rises in childhood obesity but not any reversal. Understanding these updated trends in diet quality is crucial to informing priorities to help improve the eating habits and long-term health of all of America’s youth,” Mozaffarian added.

This is a companion study to Mozaffarian and team’s research, published in JAMA in 2016, which evaluated the diets of U.S. adults between 1999 and 2014.

The researchers used data for U.S. children 2-19 years old from nine cycles of the National Health and Nutrition Examination Survey (NHANES) between 1999 and 2016. NHANES is a nationally representative study maintained by the National Center for Health Statistics. Children aged 12 and older completed the dietary recall on their own. Proxy-assisted interviews (for example, a parent) were conducted for children 6-11 years old, and proxy respondents reported diets for children aged 5 and younger. Respondents are representative of the national population and completed at least one valid 24-hour dietary recall questionnaire.

The authors assessed dietary quality using the validated American Heart Association (AHA) diet score, which includes a primary score for consumption of fruits and vegetables, fish/shellfish, whole grains, sodium, and sugar-sweetened beverages, and a secondary AHA score further adding the intakes of nuts/seeds/legumes, processed meat, and saturated fat. As a complement to the AHA score, they used the Healthy Eating Index (HEI)-2015, which measures adherence to the 2015-2020 Dietary Guidelines for Americans.

Limitations of the study include the fact that self-reported food recall data may be inaccurate due to the possibility that respondents will over-report or under-report certain foods. Also, the dietary scores used have been validated against disease outcomes among adults.

This study is a part of the Food Policy Review and Intervention Cost-Effectiveness (Food-PRICE) research initiative, a National Institutes of Health-funded collaboration led by researchers at the Friedman School working to identify cost-effective nutrition strategies to improve population health in the United States.

Additional authors are Colin D. Rehm at Albert Einstein College of Medicine and Montefiore Medical Center and Jennifer Onopa, a researcher at the Friedman School at the time of the study.

This work was supported by a grant from the National Institutes of Health’s National Heart, Lung and Blood Institute (R01HL130735) and a post-doctoral fellowship award to Junxiu Liu from the American Heart Association. Please see the study for conflicts of interest. 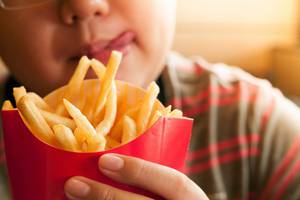 Combatting Pancreatic Cancer: Keys to Early Recognition and Diagnosis
UP NEXT...
From Stage-4 Cancer Patient to Healthcare Activist: One Survivor’s Story
CME