Researchers from Northern Arizona University and the University of Washington School of Medicine in collaboration with the Washington National Primate Research Center received a five-year, $7.5 million grant from the National Institutes of Health to fund a groundbreaking project that they hope will result in a safe and effective vaccine for Valley Fever.

The principal investigator is Paul Keim, a Regents’ professor of biological sciences and executive director of the Pathogen and Microbiome Institute (PMI) at NAU. Associate professor Bridget Barker and assistant research professor Erik Settles, also with PMI, are project leads at NAU, and Deborah Fuller, professor of microbiology and the Washington National Primate Research Center’s associate director of research is the project lead at the University of Washington School of Medicine in Seattle.

This collaborative project creates the first Center focused on Valley Fever research in Arizona, which because of its climate experiences some of the highest rates of Valley Fever in the country. The Virulence, Immunological Response, and Vaccine-Coccidioidomycosis Cooperative Research Center (VIRC-CCRC) has four research goals focused on designing an effective vaccine that can protect against Valley Fever before it becomes an epidemic. This project is a direct response to a congressional mandate that NIH creates a vaccine for Valley Fever in the next 10 years.

“We’re getting ready for the next epidemic,” Fuller said. “There’s a new threat of emerging epidemics due to climate change, and this is one of them. We need to be prepared for them.”

Valley Fever is a fungal infection common in hot, dry regions that is spreading throughout the country as the climate changes and the environment becomes hotter and drier. The disease affects all mammals, with humans and dogs being the most frequent victims, and the severity of the disease is inconsistent, with the different severities often being challenging or even impossible to explain. It can be deadly or its effects can linger for years, causing health complications in the afflicted person or animal. It’s currently treated with antifungals, but even at its best, this treatment halts fungal growth; it doesn’t get rid of it. And it doesn’t always work—Cocci has developed resistance to current treatments.

“For diseases with developed vaccines, we have found that it’s much more effective to prevent the infection than it is to treat the disease,” Barker said. “Prevention is going to be the best mechanism. By combatting Valley Fever with an effective vaccine, means people don’t get the disease at all. They never have it growing in their lungs. Their immune system can kill it before that ever happens.”

The center’s goals are expansive and tell a story of just how much we don’t know about Valley Fever. It’s frequently misdiagnosed as pneumonia, and patients can be lethargic and experience symptoms for months before a correct diagnosis. There isn’t a great test to identify Valley Fever, and currently, no effective models exist to develop a vaccine and predict if it will actually work in humans. Given the significant, increasing and ongoing threat, Valley Fever poses to human and animal health, the need to develop an effective vaccine and reliable models to test them is clear. The VIRC-CCRC aims to address this gap within the ticking clock of the congressional mandate.

“The U.S. Congress recognized that a vaccine for Valley Fever is a top priority for the nation, and it is a particularly serious threat right here at home in Arizona,” NAU President José Luis Cruz Rivera said. “I’m pleased to see this collaboration between our faculty at Northern Arizona University and their partners at the University of Washington to bring their expertise to bear in addressing this crucial issue.”

The Process of Creating a Vaccine

This work builds on research the team members have already done—generating a Cocci genome, identifying and isolating proteins produced in early infections and developing immune assays that track protective responses during infection and vaccination.

Now, working with clinical partners at the University of Arizona and Kern Medical and other researchers at half a dozen institutions, VIRC-CCRC is taking the next steps in developing an effective vaccine that triggers the correct immune response in a person, including developing a model that can test potential vaccine candidates.

Central to the goals of this program is the development of a nonhuman primate model of Valley Fever. Nonhuman primates, like humans, are vulnerable to Valley Fever and exhibit similar pathology. The team will be the first ever to closely study this model. These studies are expected to reveal new insights into the earliest events following infection that will be key to designing an effective vaccine that can prevent the infection. Barker, who has pioneered the study of Valley Fever in mouse models, is collaborating with Dr. Fuller, the Washington National Primate Research Center and the Tulane National Primate Research Center to develop the non-human primate model. Additionally, she will be leading the CRISPR gene deletion project to identify novel vaccine targets and antigens.

Settles, who has done work on immune responses for other diseases, including Valley Fever, will lead the research into T cell receptors and their importance in understanding the disease, identify vaccine targets and potentially contribute to an advanced diagnostic tool that can be used in vaccine studies along with diagnosis.

Fuller, who has worked on a number of viral vaccines including vaccines for COVID19, influenza and HIV, will lead the vaccine development effort. The goal is to use the data generated from the NAU team to design vaccines that induce immune responses against multiple phases of the organism’s life cycle. In this endeavor, Fuller will employ two novel RNA and DNA vaccine platforms she developed in collaboration with two Seattle area vaccine biotechnology companies, including one she co-founded, so the team will have a direct track toward advancing the lead candidate vaccine resulting from their work to human clinical trials. If successful, the vaccine resulting from this research will offer new hope to protect humans and animals, including nonhuman primates, dogs and livestock from Valley Fever. 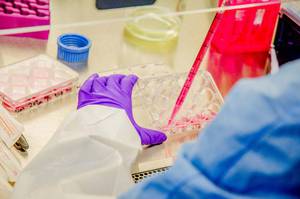