We know a lot about the human brain, but very little about how it is formed. In particular, the stages from the second to the seventh week of embryonic development have so far been virtually unknown territory to brain researchers. To learn more about this particular period, researchers from the Department of Neuroscience and the Novo Nordisk Foundation Center for Stem Cell Biology at the Faculty of Health and Medical Sciences have now developed a model that mimics these early stages of the human brain in the laboratory.

The model is based on embryonic stem cells grown in a microfluidic system developed in collaboration with bioengineers from Lund University in Sweden.

‘We know that in the early embryonic stage the brain is exposed to various concentrations of growth factors which induces the formation of different brain regions. By using microfluidic methods, we can – under extremely controlled conditions – recreate the environment found in the early embryo, explains the first author on the study, Assistant Professor Pedro Rifes.

‘When we expose stem cells to the controlled environment, we can create a tissue that resembles an embryonic brain at a very early stage, about 4-5 weeks after fertilization of the egg – a stage that we have so far not been able to study’.

The Developmental Tree of the Human Brain

The researchers will use the new model to make a map of the development of the brain cells – a kind of 'Developmental tree’ of the brain, thereby learning new things about how the enormous complexity of different nerve cells in the human brain is formed during the early embryonic stages.´

‘For the first time, we have access to a tissue that resembles the early embryonic brain, and this allows us to go in and analyze what happens to each individual cell at each stage of development’, says the principal scientist behind the study, Associate Professor Agnete Kirkeby.

A Recipe for Stem Cell Treatment

Agnete Kirkeby is well aware of the importance of a faster path to stem cell treatments. Together with colleagues from Lund and Cambridge, she has for several years worked on developing a stem cell therapy for Parkinson's disease. This project required Kirkeby and her colleagues to produce a very specific type of nerve cells, the dopaminergic nerve cells, which are the cells that are lost in Parkinson's Disease.

‘We have come a long way in the project and will soon be able to test the stem cell treatment in humans for the first time. But it took us more than 10 years to get this far because we depended on a trial-and-error methodology to develop the right nerve cells from the stem cells’.

With knowledge from the new model, the researchers expect to be able to considerably shorten this process in the future.

‘If we understand exactly how the brain develops in the early stages, we will become better at guiding the stem cells in the right direction when producing human nerve cells in the lab. This will allow us to more quickly and efficiently develop cell treatments for neurological diseases such as epilepsy, Parkinson's Disease, and certain types of dementia’, says Agnete Kirkeby.

In addition to increasing our knowledge of brain development and easing the path to future stem cell treatments, Agnete Kirkeby believes that the embryonic brain model may serve other useful purposes as well.

‘The model may be used to investigate how brain cells in the early embryonic stages react to certain chemicals surrounding us in our daily lives – these might be substances in our environment, in consumer products or in the medications that some pregnant women may require. So far, we have not had a good model to test precisely this’.

The study ‘Modelling neural tube development by differentiation of human embryonic stem cells in a microfluidic WNT gradient’ has been published in the journal Nature Biotechnology. 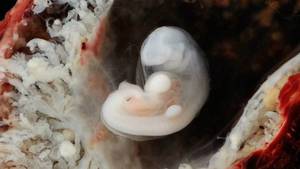 Part II: Precision Medicine in NSCLC—Implications for Molecular Testing and Treatment
UP NEXT...
Investigating a Potential Serum Biomarker for Lung Cancer
CME