The number of Americans with visual impairment or blindness is expected to jump to more than 8 million by the year 2050, according to research lead by the USC Gayle and Edward Roski Eye Institute conducted back in 2016.

With the youngest baby boomers reaching 65 years old by 2029, age-related eye diseases and conditions are expected to swell during what's being called the "silver tsunami".

According to medical experts, it's safe to say many of those cases will be caused by retinal degenerative diseases, the progressive degeneration of the light-sensitive photoreceptors in your retina.

Based on these estimates, there is an unmet need for new technologies that treat vision loss due to diseases of photoreceptor degeneration.

While there are no successful non-invasive therapeutics currently available for the treatment of vision loss, researchers at USC have come up with a new idea to address this growing problem.

Currently, ophthalmologists use electronic technology to directly stimulate retinal neurons by implanting electrode devices inside the eye, a technique that requires expensive and invasive surgery.

The research team in the USC Viterbi School of Engineering's Department of Biomedical Engineering is exploring a non-surgical solution that could restore sight by using another of the five senses.

"This is innovative technology," said Qifa Zhou, professor of biomedical engineering and ophthalmology at USC. "Right now, we are doing animal studies trying to use ultrasound stimulation to replace electric stimulation."

The research group is led by Zhou, and Mark S. Humayun, professor of ophthalmology and biomedical engineering at USC, and one of the inventors of Argus II—the world's first artificial retina.

"The technology is advantageous since no surgery is required and no device will be implanted inside the body," said Gengxi Lu, a Ph.D. student in Zhou's lab. "A wearable ultrasound device will generate ultrasound waves to stimulate the retina".

Similar to how shapes and bright spots appear when you gently push on your eyeball with your eyes closed; researchers realized that applying pressure to the eye can activate neurons and send signals to the brain.

Unlike a normal eye that is activated by light, the blind eyes were stimulated by mechanical pressures generated by ultrasound waves in this study.

"The neurons present in the retina of the eye possess mechanically sensitive channels that respond to mechanical stimulation," Lu explained. "These neurons are activated when we use ultrasound to generate mechanical pressure."

To test this ultrasound approach, in pre-clinical studies the team at USC stimulated a blind rat's eyes using high-frequency ultrasound waves that are inaudible to humans.

The technology used in this research is comparable to the ultrasound probe used for baby imaging that sends and receives sound waves through a pregnant woman's stomach.

In this case, for retinal stimulation the research group created a small ultrasound device that can be directed at a specific region of the eye to send sound waves to the retina, which is located in the back of the eye.

Using these high-frequency sounds that can be manipulated and focused on a specific area of the eye; the study demonstrated that when the ultrasound waves are projected as a pattern —for example, the letter 'C'—the rat's brain was able to pick up a similar pattern.

Unlike in humans, researchers are unable to get direct answers about the rat's visual experiences during the ultrasound stimulation.

To answer these questions of what exactly the rat was able to visualize from the ultrasound waves, the team measured visual activity directly from the rat's visual brain area known as the visual cortex by attaching a multi-electrode array.

Based on the visual activities recorded from the brain, researchers found the rat was able to perceive visualizations comparable to the ultrasound stimulation pattern projected to the eye. This work was just published in BME Fronters.

The research is currently funded by a four-year, $2.3 million grant from the National Eye Institute (NEI). The team recently applied for another NEI translational grant to take their studies to the next level.

"Right now, we are using a transducer placed in front of the rat's eyeball to send the ultrasound signals to the retina, but our final goal is to create a wireless lens transducer" said Dr. Zhou.

While the team is currently analyzing the capabilities of ultrasound technology for vision study, their future goal is to generate sharper images and install the ultrasound transducer on a wearable contact lens for next generation.

There is also a pending patent for this novel ultrasound technology that hopes to change the way visual impairment is treated years down the road. 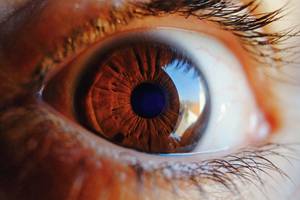