The preliminary results of a clinical trial suggest a new treatment for COVID-19 reduces the number of patients needing intensive care, according to the UK company that developed it.

The treatment from Southampton-based biotech Synairgen uses a protein called interferon beta which the body produces when it gets a viral infection.

The protein is inhaled directly into the lungs of patients with coronavirus, using a nebulizer, in the hope that it will stimulate an immune response.

The initial findings suggest the treatment cut the odds of a COVID-19 patient in hospital developing severe disease - such as requiring ventilation - by 79%.

Patients were two to three times more likely to recover to the point where everyday activities were not compromised by their illness, Synairgen claims.

It said the trial also indicated "very significant" reductions in breathlessness among patients who received the treatment.

In addition, the average time patients spent in hospital is said to have been reduced by a third, for those receiving the new drug - down from an average of nine days to six days.

The double-blind trial involved 101 volunteers who had been admitted for treatment at nine UK hospitals for COVID-19 infections.

Half of the participants were given the drug, the other half got what is known as a placebo - an inactive substance.

Stock market rules mean Synairgen is obliged to report the preliminary results of the trial.

The results have not been published in a peer-reviewed journal, nor has the full data been made available; so the BBC cannot confirm the claims made for the treatment.

But if the results are as the company says, it will be a very important step forward in the treatment of coronavirus infections.

The scientist in charge of the trial, Tom Wilkinson, says if the results are confirmed in larger studies the new treatment will be "a game-changer".

The trial was relatively small but the signal that the treatment benefits patients was unusually strong, he says.

"We couldn't have expected much better results than these," Synairgen chief executive Richard Marsden told the BBC.

He described the results as "a major breakthrough in the treatment of hospitalized COVID-19 patients".

Mr. Marsden said the company will be presenting its findings to medical regulators around the world in the next couple of days to see what further information they require in order to approve the treatment.

That process could take months, although the British government, like many others, has said it will work as fast as possible to get promising coronavirus treatments approved.

It is possible it could be given emergency approval, as the anti-viral drug remdesivir was in May.

Another possibility is that permission will be given for more patients to receive the treatment with the effects being carefully monitored to confirm it is safe and effective.

If it does get approval, the drug and the nebulizers used to deliver it would then need to be manufactured in large quantities.

Mr. Marsden says he instructed companies to start producing supplies back in April to ensure they would be available should the results be positive.

He says he expects Synairgen to be able to deliver "a few 100,000" doses a month by the winter.

How Does the Treatment Work?

Interferon beta is part of the body's first line of defense against viruses, warning it to expect a viral attack.

The coronavirus seems to suppress its production as part of its strategy to evade our immune systems.

The new drug is a special formulation of interferon beta delivered directly to the airways via a nebuliser which makes the protein into an aerosol.

The idea is that a direct dose of the protein in the lungs will trigger a stronger anti-viral response, even in patients whose immune systems are already weak.

Interferon beta is commonly used in the treatment of multiple sclerosis.

Previous clinical trials conducted by Synairgen have shown that it can stimulate an immune response and that patients with asthma and other chronic lung conditions can comfortably tolerate the treatment.

How Was the Treatment Tested?

No-one involved in the trial knew which patients have been given which treatment until it was over.

"If you know it's a drug, your mind might have a bias," explained Sandy Aitken, one of the nurses who administered the new drug to patients at Southampton Hospital.

Synairgen's drug trial was the template for the Accord program, a fast-track clinical trial scheme set up by the UK government in April to accelerate the development of new drugs for patients with COVID-19.

The Synairgen team believes the drug could be even more effective in the early stages of infection.

A trial exploring the effects of giving patients who are in high-risk groups the new drug as soon as they are confirmed as having COVID-19 has struggled to find volunteers because there are so few new infections at the moment.

What Do Other Experts Say?

Expert in emergency medicine Prof Steve Goodacre, from the University of Sheffield, said: "These results are not interpretable. We need the full details and, perhaps more importantly, the trial protocol. The trial should have been registered and a protocol made available before any analysis was undertaken."

Prof Naveed Sattar, professor of metabolic medicine at the University of Glasgow, said: "The results seem very impressive, and although accepted that the trial is small with just over 100 participants, a 79% reduction in disease severity could be a game-changer.

"It would be good to see the full results once presented and peer-reviewed to make sure they are robust and the trial conduct was rigorous. Also, with small numbers comes less certainty on the true level of benefit, or whether benefits vary between people with differing risk characteristics. Such work would require a larger trial but, even so, these results are very exciting." 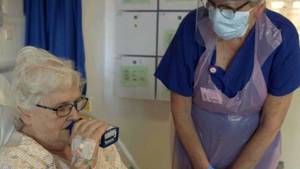 The Role of Primary Care in Diagnosing NSCLC
UP NEXT...
Investigating a Potential Serum Biomarker for Lung Cancer
CME