When Mycobacterium tuberculosis (Mtb), the bacterium that causes tuberculosis, infects a person, the body's immune response is critical to how the disease will progress—either helping the body fight the bacterium or exacerbating the infection

University of Maryland researchers discovered a way that Mtb can cause a person's immune cells to lower their defenses. Specifically, they identified a gene in the bacterium that suppresses immune defenses in infected human cells, which could exacerbate the infection.

This new finding may point to an effective target for a gene-based treatment or preventative therapy for tuberculosis, which sickens about 10 million people and kills 1-2 million people annually according to the World Health Organization. Available treatments are only 85% effective and multidrug-resistant forms of tuberculosis pose a public health threat in many parts of the world. The study was published on July 29, 2021, in the journal PLOS Pathogens.

"In order to develop novel therapeutic targets, an understanding of the molecular mechanisms of how bacterial proteins interact with human cells is essential," said Volker Briken, a professor of cell biology and molecular genetics at UMD and the senior author of the study. "This is exciting that we have discovered an interaction that has never been observed before between the bacteria that causes tuberculosis and a signaling system in human cells that is important in the cell's defense against pathogens."

Briken and his team, which was led by postdoctoral fellow and lead author of the study Shivangi Rastogi, made their discovery by infecting a type of white blood cell called a macrophage with either Mtb—the bacterium that causes tuberculosis—or a non-virulent bacterium and observing the cell's response. The researchers found that a complex of proteins called the inflammasome was dramatically limited in cells infected with Mtb, but not in those infected with the non-virulent bacteria. The inflammasome surveys a cell's interior for pathogens and then signals the cell to launch an immune response

"It was very unexpected for us to find this primary observation that Mtb can actually inhibit the inflammasome," Briken said. "The infection also causes some minor activation of the inflammasome, and so no one bothered to look for a potential of Mtb to inhibit the process. It is a classic example of the tug of war between the pathogen wanting to suppress host immunity and the host cell sensing the pathogen to activate immune responses."

Next, the team wanted to know if a specific Mtb gene was responsible for suppressing the inflammasome. The researchers inserted genes of Mtb into a non-virulent mycobacterium species and used these mutants to infect new macrophages. They discovered that infections with non-virulent bacteria carrying the Mtb gene named PknF limited the inflammasome response in host cells

"We don't know how this gene inhibits the inflammasome," Briken said, "but the function of this gene is to regulate the production and/or secretions of lipids, so we think maybe the bacterium modifies lipid secretion in a way that influences the inflammasome. That is what we will be investigating in future studies."

How PknF suppresses the inflammasome of host cells is just one of the questions Briken would like to answer. He and his team are also working to determine PknF's role in the virulence of the disease. If it turns out that suppressing the inflammasome allows Mtb to be more virulent, then the PknF gene could become a good target for future drug therapies to treat the disease. 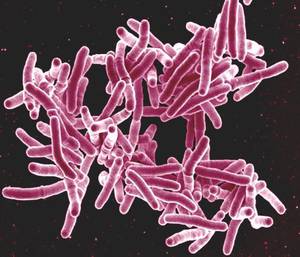