Adding to an ongoing debate over the timing of mammography, a new British study finds that screening women aged 40 to 49 for breast cancer saves lives, with only small increases in overdiagnosis.

"This is a very long-term follow-up of a study which confirms that screening in women under 50 can save lives," researcher Stephen Duffy, from Queen Mary University of London, said in a university news release.

"The benefit is seen mostly in the first 10 years, but the reduction in mortality persists in the long term at about one life saved per thousand women screened," he added.

The findings are now added to the mix of data that has fueled disparate guidelines on breast cancer screening in the United States and around the world.

In the United States, for example, the influential U.S. Preventive Services Task Force, or USPSTF, now recommends that women at average risk for breast cancer get their first mammogram starting at age 50, and then repeat the exam every two years until age 74.

The expert panel believes that before the age of 50, mammography may pick up too many false-positives and "overdiagnose" breast cancer, causing unnecessary expense and distress.

Women considering whether to get a mammogram in their 40s should discuss the matter with their doctor, the USPSTF says.

However, the American Cancer Society currently advises that women aged 40 to 44 consider the "option" of annual mammography, while women aged 45 to 54 should get the yearly screen.

Trying to settle the matter, Duffy's group looked at data from the U.K. Breast Screening Age Trial. Between 1990 and 1997, more than 160,000 women aged 39 to 41 were randomly selected to receive either an annual mammogram or to wait until the age of 50 to begin such screening, as U.K. government guidelines advised.

Now, looking at 23 years of follow-up data, the researchers found that screening at 40 to 49 was tied to a 25% reduction in breast cancer deaths over the first 10 years.

Improvements in technology may mean that earlier screening might be even more beneficial today, Duffy said.

"We now screen more thoroughly and with better equipment than in the 1990s, when most of the screening in this trial took place, so the benefits may be greater than we've seen in this study," he theorized.

Two experts in the United States agreed that when it comes to mammography, earlier may be better.

"Several other studies in the past have had similar results," noted Dr. Alice Police, who directs breast surgery at Northwell Health Cancer Institute in Sleepy Hollow, N.Y. "However, the scale of this study sets it apart and makes it a powerful reminder of our best weapon in the fight against breast cancer: the mighty mammogram."

Dr. Kristin Byrne is chief of breast imaging at Lenox Hill Hospital in New York City. She agreed that "the findings in this study substantiate what multiple other studies have found: Beginning screening mammography at age 40 saves lives."

Therefore, "especially in women in their 40s, it is very important to diagnose it when the tumor is small and before it has spread to other parts of the body," Byrne said. She also agreed with Duffy that "technology for mammography has improved since the 1990s and we are able to find more cancers and smaller cancers before it has spread."

Byrne noted that "most women who get breast cancer -- 75% to 85% -- have no known risk factors, such as family history of breast cancer, and one in eight women in the United States will develop breast cancer."

"This is why every patient should have a screening mammogram every year starting at age 40 -- sometimes sooner, if they have risk factors such as family history or a genetic mutation which puts them at increased risk for developing breast cancer," Byrne said.

The report was published Aug. 12 in The Lancet Oncology. 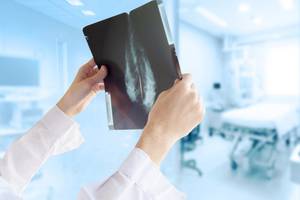 Survivorship Care for Breast Cancer Patients: Exploring the Role of the Primary Care Physician
UP NEXT...
State of the Union: Advances in the Management of mUC
CME