Researchers from the Harvard John A. Paulson School of Engineering and Applied Sciences (SEAS) have developed a fast and cost-effective method to test liquids for a ubiquitous family of chemical compounds known as amphiphiles, which are used to detect diseases such as early-stage tuberculosis and cancer as well as to detect toxins in drugs, food, medical devices, and water supplies.

The research was published recently in the Proceedings of the National Academy of Science (PNAS).

Today’s gold standard for testing for endotoxins, a common type of amphiphiles that can contaminate water and can cause severe illness and death, requires the use of compounds only found in the blood of horseshoe crabs — making the process expensive and unsustainable. Cheaper alternatives are not nearly sensitive enough to detect amphiphiles at meaningful levels.

The new test, developed by Joanna Aizenberg, the Amy Smith Berylson Professor of Materials Science and Professor of Chemistry & Chemical Biology at SEAS, and Xiaoguang Wang, a former postdoctoral Fellow in Aizenberg lab and now an Assistant Professor of Chemical and Biomolecular Engineering at Ohio State University, uses rolling droplets on microstructured surfaces to detect amphiphiles at ultralow concentrations.

The research team demonstrated the technique to detect levels of pathogenic amphiphilic endotoxins in water, compounds that can be toxic even at extremely low concentrations.

The microstructured surface is made up of thousands of circular micropillars, evenly coated with self-assembled long-tailed molecules, creating a smooth, friction-free interface except for at the edges of the micropillars. Here, there are gaps in the coating — like molecular potholes. When a droplet rolls down the surface, if it has no amphiphile molecules, it will hit a pothole and stop, unable to overcome the friction of the disordered edge.

“Our surfaces provide a rapid and portable method of detecting amphiphiles within droplets that you can see with your bare eyes,” said Aizenberg. “No other methods allow detection at the low levels that we’re seeing in our tests, without using expensive or sophisticated equipment.”

The researchers also developed a model to predict how different amphiphile compounds at different concentrations would interact with the structured surface. By changing the size, shape and distance between pillars, as well as the molecular coating, the surface can be tuned to detect specific types of amphiphiles at specific concentrations.

“Our method is broadly applicable to any kind of amphiphile,” said Wang. “With this general method, we are already detecting endotoxins at levels that are relevant for water quality testing, but the test can also be further optimized to detect even lower concentrations.” 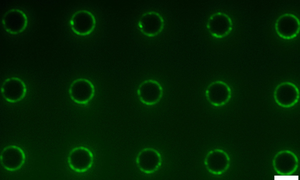