More than 40,000 allogeneic hematopoietic stem cell transplants are carried out worldwide every year, mostly for patients suffering from leukemia or other diseases of the hematopoietic system. Very often, the so-called graft-versus-host reaction occurs, an inflammatory disease that can affect different organs and is caused by an unwanted defense reaction of the donor cells and the body's own T cells. Scientists at CeMM, Medical University of Vienna, and LBI-RUD, led by Georg Stary, now show how these endogenous, tissue-derived T cells enter other organs, such as the intestine, via the blood and contribute to inflammation there. The study provides important approaches to better therapy in stem cell transplantation and new diagnostic options. It was published in the Journal of Experimental Medicine.

Stem cell transplants are an important, essential treatment method, especially for leukemia patients. According to the Transplant Annual Report 2020, 630 of these transplants were performed in Austria alone in 2019. In this process, all blood cells of the affected patient are first killed by chemotherapy and radiation, and then replaced by healthy bone marrow or blood stem cells from a donor. About half of the patients develop inflammatory skin diseases with serious consequences after the transplantation. T-cell-mediated rejection is one of the main causes of death after hematopoietic stem cell transplantation. In a previous study, a team of researchers led by dermatologist Georg Stary at the CeMM Research Center for Molecular Medicine of the Austrian Academy of Sciences, the Medical University of Vienna and the Ludwig Boltzmann Institute for Rare and Undiagnosed Diseases was able to identify a mechanism that triggers this graft-versus-host reaction (graft-versus-host disease, GVHD). In skin samples taken from patients before and after transplantation, Stary and study author Johanna Strobl (MedUni) were able to show that host-derived T cells in the skin tissue are responsible for the inflammatory reactions.

Tissue-Resident T Cells of the Skin Migrate into the Blood

In their current study, using the new model, Strobl and co-author Laura Marie Gail (CeMM/LBI-RUD) show that these tissue-resident T cells of the skin can be found in the blood of stem cell transplant patients. "The migration of the inflammatory, tissue-derived skin T cells into the bloodstream poses a risk of the skin inflammation being passed on to other organs. Especially in the intestine, which is often affected by GVHD, we found an astonishing number of cells that originally came from the skin," say the study authors.

Deactivation of T Cells as Possible Approach to Improving Therapy

For their study, Strobl, Gail, and Stary investigated circulating T cells in the blood using samples from stem cell transplant patients. Using a special tracking method, the scientists were able to distinguish exactly which T cells were from the donor and which were from the patient. Research group leader Stary explains: "After all blood cells had already been killed by chemotherapy, we were able to conclude that the detected T cells could only come from the tissue. With the help of various markers, they could be traced back to the skin."

Blood Sample Instead of Biopsy

The study also provides indications for an additional important diagnostic aspect. The study authors were able to observe that more circulating T cells in stem cell transplant patients are detectable in the blood, depending on the clinical picture. Accordingly, it is quite conceivable that in the case of skin or tissue diseases, a blood analysis could be carried out and the phenotype of the skin-derived T cells in the blood evaluated instead of the time-consuming and often unpleasant sampling of the affected area. "This procedure would be a kind of 'liquid biopsy' in the case of inflammatory reactions in the tissue," say the study authors. 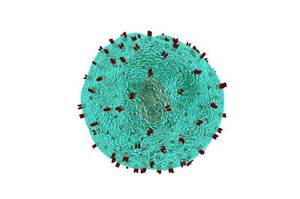 Expert Perspectives on CLL: Anticipated Highlights from the 63rd Annual ASH Meeting
UP NEXT...
State of the Union on HER2-Low Breast Cancer: Clinical Statistics & Trends
CME