More than a quarter of the country’s doctors report extremely high levels of anxiety because of the coronavirus pandemic, according to research by Sheba Medical Center at Tel Hashomer.

The research was led by Doron Gothelf, director of the Child Psychiatry Division at Sheba, and is expected to be published this month in the peer-reviewed journal Depression and Anxiety. Colleagues Dr. Mariela Mosheva, Nimrod Hertz, and Dr. Raz Gross also participated.
Specifically, the team found that among 1,106 Israeli physicians who took a survey between March 19-22, some 26.9% of them reported anxiety scores above the cutoff level. The factors most strongly associated with anxiety among physicians were mental exhaustion, anxiety about being infected, anxiety about infecting family members, and sleep difficulties.
Moreover, the study found that only a small minority of those surveyed felt protected by national and local government or by the hospital and health system during the pandemic, which added to the anxiety.
The study further showed that resilience – defined as the act of coping, adapting, or thriving from adversity – helped reduce anxiety.
“We know that anxiety negatively affects [the ability of] a person and a doctor to function,” Gothelf told The Jerusalem Post. “When you are too anxious and sleepless, you make more mistakes. It also accelerates burnout and negatively affects your ability to help your patients.”
Furthermore, a separate study by a team of researchers from the Institute of Nursing Science at the Medical University of Graz in Austria found that wearing face masks may not only cause physical consequences like headaches and pain, which can increase stress among medical personnel, but wearing them for long periods of time is associated with increased stress levels in general.
In that study, 2,600 nurses (73.3% who work in hospitals, 17.2% in long-term care institutions, and the rest in other jobs) reported on their use of personal protective equipment since the start of the pandemic.
Nearly all participating nurses used masks and protective gloves during their daily work. More than half of the nursing staff had moderate stress levels (56.8%), and 10.5% reported experiencing high-stress levels.
When investigated further, the study found there was no statistically significant association between the use of PPE and stress. Still, “one-third of the nursing staff who used face masks experienced a low-stress level,” according to the report, which was published on medRxiv. The study is a preliminary report that has not been peer-reviewed. “In contrast, less than 20% of nursing staff who did not use face masks experienced a low-stress level.”
The study did show a statistically significant association between the duration of mask usage and stress.
“In general, the longer the nurses wore the face masks... the higher their perceived stress level,” the researchers reported. “The highest stress level was reported by nurses who wore masks for longer than eight hours. Nurses who wore face masks for more than eight hours had statistically significant higher stress levels than those who used these types of masks for less than four hours or for between four to eight hours.”
It also showed that nurses who wore filtering facepiece (FFP) masks for more than eight hours had significantly higher stress levels than those who used other types of masks, and that the perceived stress level increased statistically significantly as the average mask-wearing time increased.
The Graz team suggested that these results should be considered in setting policies for healthcare workers, including potentially exploring a maximum duration of time for wearing each type of mask.
“Such regulations could help to prevent work-related stress, particularly in the case of future epidemics, and avoid burnout among nursing staff or even nurses leaving their jobs,” the authors wrote. “The consequences of both of these negative outcomes should be considered in light of the predicted expected future shortage of healthcare workers.”
Additionally, as per Gothelf’s study, he said that there should be a focus on increasing resilience among healthcare workers.
“A major focus and finding of the paper was that resilience mitigates anxiety,” Gothelf explained. “We found that physicians with low levels of resilience were twice as likely to experience anxiety compared to physicians with high resilience.
“Our findings suggest that an effort should be made both to decrease anxiety-related risk factors, and enhance resilience among physicians,” he continued. “Such interventions should include interventions to promote resilience, presence of hospital leadership, providing clear guidelines about prevention of infection and equipment for protection, as well as specific measures to help physicians overcome sleep difficulties and mental exhaustion.”
He said understanding these factors has a heuristic value for public planning and for interventions aiming to reduce physicians’ anxiety and improve their ability to cope with the enormous challenges of treating patients during the COVID-19 pandemic.
Neither study is conclusive.
Read full article 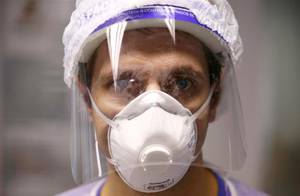 The Importance of Extended Genotyping in Cervical Cancer Screening: The Special Case of HPV 31
UP NEXT...
Family Matters: The Link Between Family History & BRCA Mutations
CME