Because cancers in children are rare, many details about their biology remain unknown. In the field of cancer genetics, there’s a limited understanding of how inherited genetic changes may contribute to the formation and growth of tumors. Making connections between particular gene mutations and disease requires a lot of data, which until recently has been largely unavailable for pediatric cancers.

Now, tests like MSK-IMPACTTM can screen tumors for mutations in more than 500 genes as well as analyze patients’ normal (germline) cells. In the largest study of its kind so far, researchers from Memorial Sloan Kettering’s pediatric program, MSK Kids, are reporting germline genomic sequencing details for 751 pediatric patients treated for solid tumors.

The paper, published February 15, 2021, in Nature Cancer, explains how understanding the hereditary factors associated with children’s cancers can help both patients and their family members better understand the risk of future cancers. Armed with this information, they can undergo screening and prevention measures as appropriate. It may also be used for family planning purposes. In a small but growing number of cases, this information may even help select the most appropriate treatment for a child’s cancer.

“Many of the associations we are learning about with this kind of testing were not previously known and have broadened our understanding of how inherited genes may be related to a predisposition to pediatric cancers,” says genetic counselor Elise Fiala, the paper’s first author. “We’re hoping to raise awareness about these connections and about how testing for these inherited genes might be clinically useful.”

For certain types of adult cancers — such as breast cancers and colorectal cancers diagnosed in younger adults — the importance of screening patients for mutations in the BRCA1 and BRCA2 genes and Lynch syndrome is well established, especially for people who may have a family history of many cancers. But hereditary links to pediatric cancers have been largely unrecognized. Additionally, guidelines for which pediatric patients should be screened for inherited mutations are based on limited data.

“This study shows that the criteria we currently use to determine who should receive germline testing are flawed,” says physician-scientist Michael Walsh, the paper’s senior author, who leads research on inherited pediatric cancer genomics within MSK’s Robert and Kate Niehaus Center for Inherited Cancer Genomics.

“In about half of the patients in whom we found an inherited predisposition, we would not have predicted detection of a cancer predisposition mutation and would not have screened them,” he adds. These findings included mutations in the BRCA genes; the genes associated with Lynch syndrome; the gene TP53, which is linked to an inherited disorder called Li-Fraumeni syndrome; and others.

The Value of Genetic Testing

There are many reasons why it’s important to know whether a child’s cancer is caused by an inherited gene mutation, which are outlined in the paper.

For one thing, it can guide treatment. For example, tumors caused by the genes associated with Lynch syndrome may potentially respond to immunotherapy drugs called checkpoint inhibitors. These drugs usually don’t work in pediatric cancers, so unless a patient is known to have Lynch syndrome, they likely wouldn’t be considered.

Learning that a child has an inherited cancer gene can also help families. Parents, siblings, and other relatives may benefit from genetic testing to look for the same gene mutation. If the results are positive, they can be monitored more closely for cancer or consider preventive measures. For families that are planning to have more children, in vitro fertilization and preimplantation diagnosis — in which embryos are screened for harmful mutations before being put in the uterus — can be considered.

Testing for germline mutations in pediatric cancers can also help researchers learn more about the causes of some of these cancers, which could lead to new methods of diagnosis and treatment. In the Nature Cancer paper, the researchers provide evidence of a previously unrecognized link between a gene called CDKN2A and osteosarcoma, the most common form of bone cancer in children and young adults.

The researchers report that only 31% of families with children found to have inherited mutations opted to seek genetic testing in additional relatives. Ms. Fiala says this was not surprising because these families were in the middle of coping with a child being treated for cancer.

“But these findings have much broader implications than for just the 16,000 children diagnosed with cancer in the United States every year,” Dr. Walsh says.

Ms. Fiala explains that the results from the study are important not only for children currently being treated for cancer and their families, but for cancer survivors. “Many people who were treated for cancer as children are now at the age where they’re considering having kids,” she says. “We would love to see people who have a cancer history and are now planning families consider testing so they can learn more about their risks and options.” 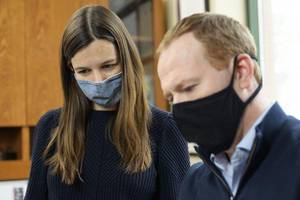 Assessing Quality of Care: Implementing a Lung Screening Program
UP NEXT...
Pioneering Innovative Solutions for Thyroid Cancer Patients Amid a Pandemic
CME