Young adolescents who are targets of cyberbullying are more likely to report suicidal thoughts and attempts, an association that goes above and beyond the link between suicidality and traditional offline bullying, according to new research from the Lifespan Brain Institute (LiBI) of Children’s Hospital of Philadelphia (CHOP) and the University of Pennsylvania. The findings were published today in JAMA Network Open.

“At a time when young adolescents are spending more time online than ever before, this study underscores the negative impact that bullying in the virtual space can have on its targets,” said senior author Ran Barzilay, MD, Ph.D., an assistant professor at LiBI. “Given these results, it may be prudent for primary care providers to screen for cyberbullying routinely in the same way that they might screen for other suicide risk factors like depression. Educators and parents should also be aware of the substantial stress bullying in the cyberworld places on young adolescents.”

Suicide rates among children have been steadily rising. According to the CDC, suicide was the second leading cause of death among individuals between the ages of 10 and 24 in 2018. The factors contributing to suicidality in children and adolescents are not fully understood, but research has shown that environmental stressors play a role. Traditional bullying and peer victimization are well established suicide risk factors among youth.

In modern times, and particularly since the COVID-19 pandemic, a substantial proportion of peer interaction, including bullying, occurs online, through text messages or social media platforms. However, prior to this study, it was not clear whether being a target of cyberbullying is an independent risk factor for suicidality.

To better understand whether cyberbullying is unique in its association with suicidality in early adolescence, the researchers collaborated with Anat Brunstein Klomek, Ph.D. at Baruch Ivcher School of Psychology at Reichman University in Israel. Together, the researchers analyzed data collected between July 2018 and January 2021 from the Adolescent Brain Cognitive Development study (ABCD Study), a diverse sample of over 10,000 US children between the ages of 10 and 13.

As part of the ABCD Study, participants filled out a cyberbullying questionnaire, which asked whether they had ever been a target or perpetrator of cyberbullying, defined as “purposefully trying to harm another person or be mean to them online, in texts or group texts, or on social media (like Instagram or Snapchat).” Traditional offline bullying was surveyed through a separate questionnaire, which broke down behavior into three categories: overt aggression, such as threatening or hitting; relational aggression, such as not inviting or leaving someone out; and reputational aggression, such as spreading rumors or gossiping.

To determine suicidality, the researchers examined whether participants reported past or current suicidal thoughts or acts.

“Our findings suggest being a target of cyberbullying is an independent risk factor for youth suicidality,” Dr. Barzilay said. “For policymakers wishing to optimize youth suicide prevention efforts, this study should further encourage interventions for those who are being bullied online.” 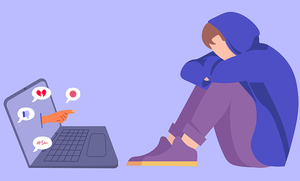