A 23-year study being presented at the 23rd European Congress of Endocrinology (e-ECE 2021), on Monday 24 May 2021 at 14:40 CET (http://www.ece2021.org), has found that women who experience gestational diabetes (GDM) when they are pregnant, are more prone to developing type-1 and type-2 diabetes later in life. The long-term study suggests that autoantibody testing should be considered for women who experience GDM in order to have a better understanding of their prognosis.

Diabetes is a chronic disease that occurs either when the pancreas does not produce enough insulin or when the body cannot effectively use the insulin it produces. Globally, the number of people with diabetes rose from 108 million in 1980 to 422 million in 2014. Gestational diabetes is a form of diabetes women may experience during pregnancy and usually disappears after giving birth. However, 50% of women who experience GDM go on to develop type-2 diabetes later in life (published results from the same study), and 5.7% develop type-1 diabetes (even though it is often considered 'juvenile diabetes'). Due to the number of significant health issues diabetes can cause, this study is important as it allows healthcare professionals and women at risk of developing diabetes to be aware of their potential condition and adapt their lifestyle accordingly.1

Dr. Kaisu Luiro of Helsinki University Hospital assessed 391 women who gave birth between 1984-1994 and experienced gestational diabetes during their pregnancy. A follow-up questionnaire assessing later onset of type-1 and type-2 diabetes was sent in 2012-2013. The mean follow-up time was 23 years, making this study the longest follow-up to date in relation to GDM studies. The study found that glutamic acid decarboxylase and islet cell autoantibodies present during pregnancy can reliably predict the development of type-1 diabetes later in life. The results were as follows:

* Single autoantibody positivity was detected in 12% of the cohort of women who experienced gestational diabetes and in 2.3% of the control cohort.

"The strong relationship between women who have gestational diabetes and women who experience type-1 and type-2 diabetes later in life, suggests that women should now receive more extensive testing during pregnancy, in order to determine their level of risk. We also hope that healthcare professionals initiate conversations with their patients about the relationship between GDM and diabetes later in life. In the future, there are on-going developments for more accurate prediction models which hope to give a more specific suggestion as to who should be tested during pregnancy," Dr. Luiro comments.

As diabetes is an increasingly prevalent health problem, this study is particularly important as it highlights women potentially at risk of developing type-1 or type-2 diabetes. This, and more specific prediction methods in the future, hopefully will provide an opportunity for healthcare professionals to inform and educate on the increased risk of developing diabetes in later life, and women with GDM to consider a healthy and balanced lifestyle in order to prevent or delay the onset. 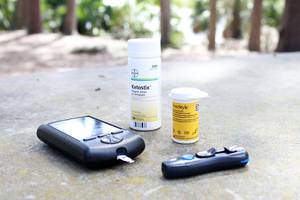 Living with Lymphedema: A Patient Perspective
UP NEXT...
A Practical Perspective on Aggressive Disease Management in NSCLC
CME