Marjorie L. McCullough, Sc.D., from the American Cancer Society in Atlanta, and colleagues examined the associations between SSBs and artificially sweetened beverages (ASBs) and mortality from all cancers combined, obesity-related cancers combined, and 20 cancer types among men and women.

A total of 934,777 cancer-free participants provided information on usual SSB and ASB consumption in 1982; deaths were identified through 2016. A total of 135,093 participants died from cancer during follow-up.

Compared with never, consumption of 2 or more SSB drinks per day was not associated with all cancer mortality but was associated with obesity-related cancers (hazard ratio, 1.05). After adjustment for body mass index (BMI), this association became null.

SSBs were associated with increased mortality for colorectal and kidney cancers (hazard ratios, 1.09 and 1.17, respectively). After adjustment for BMI, these associations persisted.

After controlling for BMI, the positive association of ASB consumption with obesity-related cancers was null, but the increased risk for pancreatic cancer was robust (hazard ratio, 1.11).

“Although SSB consumption has decreased in the United States, intake remains high, and ASB consumption levels are increasing,” the authors wrote. “Continued research on the impact of both beverage types with cancer risk and mortality is warranted to determine whether these associations are causal or confounded by other lifestyle factors, and whether they are mediated through BMI.” 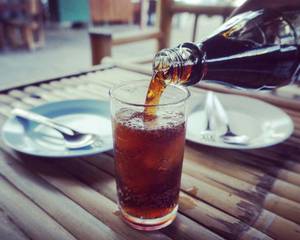