A gradual reopening that gets people outdoors where the new coronavirus is less likely to survive is key to successful containing the COVID-19 outbreak, experts said.

The approach is based on findings that suggest SARS-CoV-2, the virus that causes COVID-19, survives for 30 minutes after exposure to ultraviolet sunlight and, in general, doesn't fare as well in warmer, more humid air, researchers said.

"Governmental public health measures need to be more scientific in approaches, and ignoring more and more data showing seasonality to SARS-CoV2 is not helping," Dr. Anthony Amoroso, chief of the Division of Infectious Diseases at the University of Maryland School of Medicine, told UPI.

"Waiting to reopen universities and schools until the fall is absolutely counterproductive and more likely to fail versus using the summertime to proceed with gradual reopening and getting people out of doors into UV light as best we can," he said.

As evidence, Amoroso and other researchers refer to the findings of two key studies of SARS-CoV-2, the virus that causes COVID-19, both of which were published earlier this month.

The second, published by JAMA Network Open on June 11, suggested that climates with warmer temperatures and higher humidity -- like much of the United States during the summer -- might slow the spread of the virus. Amoroso was a co-author on the study.

More than 2.3 million cases of COVID-19 had been confirmed in the United States through Wednesday afternoon, according to Johns Hopkins University.

The authors of both studies argue that people might be safer outdoors. This runs counter to many of the lockdown and social distancing measures implemented across much of the country in March, the researchers told UPI.

In the model of ultraviolet radiation developed by the authors of the Photochemistry and Photobiology analysis, SARS-CoV-2 did not survive long on surfaces.

If a person infected with COVID-19 coughed onto an outdoor surface, in a large gathering, the virus would be largely harmless within one-half hour, with just a tiny viral load remaining, the researchers said.

An analysis of a COVID-19 outbreak linked with University of Texas students who visited Cabo San Lucas, Mexico, in March, published Wednesday by the U.S. Centers for Disease Control and Prevention, found that 28 percent of the 231 people -- including the travelers and their close contacts -- tested positive for the virus, although roughly one in five were asymptomatic.

Several of those infected included roommates of the travelers, as well as community contacts, the CDC researchers said.

Implementing lockdowns and then rapidly lifting them "releases [people not immune to the virus] into potentially contaminated environments in waves," Jose-Luis Sagripanti, co-author of the Photochemistry and Photobiology study, told UPI.

"If COVID-19 is not stopped this summer [because states] opened up, then the progression of [the disease] into winter will be rather bad," said Sagropanti, a retired U.S. Army researcher with an expertise in biosecurity, adding that this characterization is likely an "understatement." 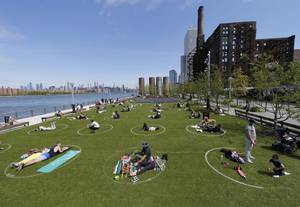 Combatting Pancreatic Cancer: Keys to Early Recognition and Diagnosis
UP NEXT...
Survivorship Care for Breast Cancer Patients: Exploring the Role of the Primary Care Physician
CME