Older adults who have surgery with general anesthesia may experience a modest acceleration of cognitive decline, even years later. But there's no evidence of a link to Alzheimer's disease, according to new research from Mayo Clinic.

The research, published in the British Journal of Anaesthesia, examined brain scans from 585 patients, ages 70 to 91 ? 493 of whom had at least one surgery with general anesthesia. The analysis found cortical thinning in cerebral areas but no significant evidence of deposits of amyloid protein, a hallmark of Alzheimer's disease. The cortex is the outermost layer of the brain's nerve cell tissue, and thinning of that tissue is associated with diminished cognitive functions.

"This finding suggests that the modest cortical thinning is not related to Alzheimer's disease pathology, but is caused by other processes," says Juraj Sprung, M.D., Ph.D., a Mayo Clinic anesthesiologist and first author of the study. "These results are reassuring and consistent with the conclusion that surgery and anesthesia do not increase the risk for development of Alzheimer's disease."

The potential link between surgery with anesthesia and cognitive decline in older adults has been examined for many years, and concerns have grown as animal studies have indicated that exposure to inhaled anesthetics may be related to brain changes similar to those seen with Alzheimer's disease.

Alzheimer's disease is a progressive disorder that causes brain cells to degenerate and die. It is the most common cause of dementia and the sixth leading cause of death in the U.S. Also, Alzheimer's disease causes a continuous decline in cognition and behavior that disrupts a person's ability to function. While there is no cure, some medications can slow its progression. An estimated 5.8 million Americans are living with the disease, according to the Alzheimer's Association.

One of the key indicators of Alzheimer's disease is a buildup of proteins in the cortical area of the brain, which can be visualized by positron emission tomography (PET) scans. The protein deposits, called "amyloid plaques," have a toxic effect on neurons and can precede any clinical symptoms of the disease by 30 years or more.

The Mayo Clinic study used data from the Mayo Clinic Study of Aging, which started in 2004 and has data on more than 5,000 participants ? all from Olmsted County, Minnesota, where Mayo Clinic in Rochester is located. The study analyzed 585 patients, 493 of whom had at least one surgery with general anesthesia after age 40, and later had PET scans. Of those, the median time between surgery and the PET scan was 25.9 years.

The researchers used two methods to define amyloid deposition in the PET scans. "Regardless of the definition used, no significant associations were detected between exposure to surgery and anesthesia, and increased amyloid deposition," Dr. Sprung says.

Dr. Sprung and Mayo Clinic colleagues published a study last year that also noted the association between surgical anesthesia and cortical thinning in the signature region for Alzheimer's disease. The study cautioned that the pathogenesis and mechanisms driving these changes required more study.

The new study concludes that the cortical thinning was not associated with pathologic changes related to Alzheimer's, but was caused by other undetermined processes.

"Older adults who are considering surgery, and their families, must be properly informed of the risk for slightly accelerated cognitive decline in the years following surgery," says Dr. Sprung. "However, they should also be made aware that this potential impact may be related to preexisting conditions that necessitate the surgery."

"Most important, patients should be reassured by our findings that surgery with anesthesia does not lead to changes associated with Alzheimer's disease," says Dr. Sprung. 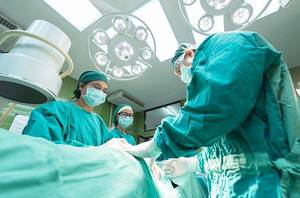