The normal functioning of our hearts is maintained by our body's control center—the brain—via an intricate network of nerves. When this communication is disrupted, it results in heart disease, including heart attacks, sudden cardiac death and problems in blood supply. As an added layer of safety, the heart has its own 'little brain', called the intracardiac nervous system (ICN) to monitor and correct any local disturbances in communication. The ICN is essential in supporting heart health and can even protect cardiac muscle during a heart attack. But it's not clear how exactly the ICN carries out these roles, because the organization of the neurons that make up the ICN are poorly understood; we don't know where they are located in the heart, how they are connected to each other, and what their molecular properties are.

In a groundbreaking study published in iScience on May 26th, researchers at Thomas Jefferson University and their collaborators have been able to answer these questions in unprecedented detail.

"The ICN represents a big void in our understanding that falls between neurology and cardiology," says co-senior author James Schwaber, Ph.D., director of the Daniel Baugh Institute for Functional Genomics and Computational Biology (DBI) and co-senior author of the study. "Our goal was to bridge that gap by providing an anatomical framework of the ICN."

"The only other organ for which such a detailed high-resolution 3-D map exists is the brain," says co-senior author Raj Vadigepalli, Ph.D., Professor of Pathology, Cell Biology and Anatomy. "In effect what we have created is the first comprehensive roadmap of the heart's nervous system that can be referenced by other researchers for a range of questions about the function, physiology, and connectivity of different neurons in the ICN."

The study drew on technologies and expertise from different research groups (from Jefferson and University of Central Florida) and industry partners (Strateos and MBF Bioscience), eventually creating a dual-approach pipeline. One approach involved a novel imaging technique called Knife-Edge Scanning Microscopy (KSEM) that allowed the researchers to build a precise 3-D model of the entire rodent heart; it is the first use of this technology for cardiac research. The second approach used a technique called laser capture microdissection to sample single neurons for gene expression analysis, as well as to map their individual positions within the 3-D structure of the heart.

"Because this hasn't been done before, we were trouble-shooting the protocol as we went along," says co-author Sirisha Achanta, Lab Manager at the DBI. "The heart, unlike the brain, is not symmetrical, so we had to figure out ways to maintain consistency across each heart that we imaged."

The 3-D map revealed hitherto unknown complexity of the ICN. The researchers found that the neurons that make up the ICN are found in a coherent band of clusters on the base (top) of the heart, where the heart's veins and arteries enter and leave, but also extend down the length of the left atrium on the back of the heart. They're positioned close to certain key heart structures like the sinoatrial node.

"We know the sinoatrial atrial node is important in creating the heart rate or pace," says co-author Jonathan Gorky, a recently graduated MD/Ph.D. student and now a resident at the Massachusetts General Hospital. "Seeing the clustering of neurons around it was something we had always suspected but had never known for sure. It was really interesting to see the physical evidence of the ICN's function and the precise distribution of the neurons in relationship to the anatomical structures of the heart."

The gene expression analysis of individual neurons also pointed to previously unknown diversity of molecular identities or phenotypes. "We found that there are several different types of neuromodulators and receptors present," explains Dr. Vadigepalli. "This means that we don't just have neurons in the heart that shut on and off activity, but also those that can fine-tune the activity of the ICN."

When comparing male and female rat hearts, the researchers also found sex-specific differences in the way neurons were organized, both spatially and by their gene expression. Co-authors Alison Moss, Ph.D. Candidate in Biochemistry and Molecular Pharmacology, and Shaina Robbins, a senior research assistant, are pursuing further analyses based on these findings. "It could help us explain some of the differences in heart disease in men and women," says Moss. "We're now trying to create a 3-D model of the intrinsic nervous system of the pig heart, which is even more anatomically comparable to the human heart, to explore those questions further."

This project is part of a NIH research program called 'Stimulating Peripheral Activity to Relieve Conditions', or SPARC, which aims to promote development of therapeutic devices that modulate electrical activity in nerves to improve organ function. "Around thirty years ago, there were studies showing peripheral nerves like the vagus nerve were critical for the health of organs like the heart and stimulating them could even remediate disease" explains Dr. Schwaber. "But those studies were not able to tell us what amount, frequency and location of stimulation is beneficial or harmful."

"Now that we know where neurons are located in relation to heart structures, we can ask questions like—does stimulating in one location, or even selectively stimulating specific neurons make a difference?" says Dr. Vadigepalli.

The researchers are delighted that the pipeline they've created is now being used by other groups in the SPARC research program. "Our protocol uses everyday lab materials and techniques," says Achanta. "It is highly reproducible and is available now for other organ systems to map not just neurons, but other micro-structures."

"Eventually the hope is to create a 3-D map for the human heart, both in health and disease," says Dr. Schwaber. "We've created the foundation for an endless possibility of future studies." 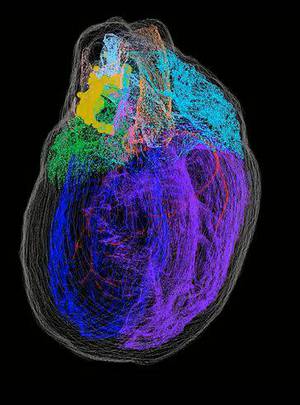 Breast Cancer's Reality Check: Separating Facts from Fiction for Patients
UP NEXT...
NSCLC: An Aggressive Approach for Personalized Therapy
CME