To build a delicate, bioengineered eye implant capable of restoring a person’s vision, one company is setting its sights high—really high—by exploring ways to build them in space.

LambdaVision, with a lift from its partner Space Tango, scored $5 million from NASA to test how microgravity could affect the production of its artificial retinas. The company aims to tackle retinitis pigmentosa, a rare genetic disorder that damages the light-sensing cells lining the back of the eye.

It’s been developing the implant here on Earth for several years, but thinks making them in low Earth orbit—250 miles above the planet—could lead to “small improvements that need to be done regardless of where it is being manufactured,” said LambdaVision CEO Nicole Wagner, Ph.D.

The $5 million award will pay for a series of flights over three years to send LambdaVision’s manufacturing systems to the International Space Station. The goal is to figure out what benefits the low-gravity environment brings to implant manufacturing and to create implants for preclinical and clinical work back on the ground.

LambdaVision constructs the artificial retina using alternating layers of a light-sensitive protein called bacteriorhodopsin and a polymer on a scaffold material commonly used in medical devices. The implant is designed to replace the function of the patient’s degenerated photoreceptors, with the proteins absorbing and converting light into signals sent to the brain.

The company thinks its approach could improve upon other treatments in development for retinitis pigmentosa, which can be caused by mutations in any one of more than 50 genes. Unlike gene therapies, which take aim at specific mutations, LambdaVision’s implant could be used to treat patients regardless of their genetic makeup. And it could be easier to implant and use than electrode-based devices, described as bionic eyes.

“There is a number of electrode-based technologies in development, but they have a very, very low digitalized resolution,” Wagner said. “They’re big and bulky, which makes them difficult to implant. Because we are packing protein molecules on a scaffold, we’re not limited by the number of electrodes that can be put on a chip.”

The company uses a layer-by-layer process on Earth to make sure there’s enough protein to absorb appropriate amounts of light. Making the retinas in microgravity could result in more efficient binding between the layers, or fewer defects in each layer that’s made, said Jordan Greco, Ph.D., LambdaVision’s chief scientific officer. The company could reduce the amount of protein and other materials used to make the implants, so they’re cheaper and faster to make, he said.

The manufacturing system will be housed in Space Tango’s CubeLabs, which are customized to carry out experiments or processes in an automated way.

But does it make economic sense to make retinas in orbit? Cost savings aside, LambdaVision is still blasting stuff into space.

“Our first goal is to target the indication of retinitis pigmentosa, which is a rare disease… We would need a very low production volume to meet the needs of preclinical studies and phase 1 trials,” Greco said.  LambdaVision’s automated process—as well as the small size of the implant and the small patient population—means its artificial retinas will have a relatively small footprint aboard the International Space Station.

“We think there is an economic model that allows us to do this at a reasonable cost on the space station,” Greco said.

After that, the plan is to “pivot to steady-state production” for retinitis pigmentosa and test the retina in degenerative diseases that affect many more patients, such as age-related macular degeneration.

Eventually, Space Tango envisions the project moving off the ISS—perhaps to its own orbiting satellites.

“It’s a facility that’s been inhabited by people for the last 20 years, so it’s not the cleanest environment,” said Jana Stoudemire, Space Tango’s chief innovation officer. “There’s not a lot of space on the International Space Station to really manufacture.”

What’s more, it’s not exactly practical to send regulators to the ISS to inspect device or drug manufacturing.

“One of the biggest pieces for us, in addition to the applications we are defining, is the opportunity to establish capabilities to address the GMP infrastructure that needs to be in place to produce products intended for human use,” Stoudemire said.

Space Tango is working on a solution called ST-42, or, in Clements’ words, “a factory with a heat shield.” It’s an “audacious goal,” he said, but the idea is to blast a crewless capsule into orbit, where it would spend time running a variety of experiments autonomously. Once it’s done, it would re-enter the atmosphere.

Not only could regulators inspect the factory while it’s on the ground, but companies could blast experiments off—and retrieve them—on their own schedule, without relying on resupply missions. The platform is slated for launch in the middle of this decade. 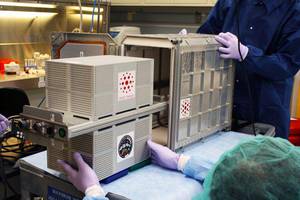 Are Practicing Ob-Gyn Oncologists on Your Speed Dial?
UP NEXT...
Primary HPV Screening: A Nurse Practitioner’s Perspective
CME