The UK's newest, and largest, hospital facility is preparing to open its doors to take in coronavirus patients needing intensive care treatment.

East London's ExCeL exhibition center, which normally plays host to lifestyle shows, expos, and conferences, has been converted into the temporary NHS Nightingale hospital, with space for 4,000 beds.

In nine days, the 87,328 square meters of double exhibition halls, have been fitted out with the framework for more than 80 wards, each with 42 beds. Some 500 fully-equipped beds, with oxygen and ventilators, are already in place and there is space for another 3,500.

If it did reach capacity, it would be one of the largest hospitals in the world.

How Was It Built?

The facility, which was officially opened on Friday, was built with the help of up to 200 soldiers a day from the Royal Anglian Regiment and Royal Gurkha Rifles, working long shifts alongside NHS staff and contractors.

Architects and engineers from BDP, the firm that helped convert the centre, were part of the planning team given the task of creating the life-saving facility.

BDP Principal James Hepburn said the scale and timeframe for the construction were unlike previous healthcare projects and architects were coming up with designs almost as building needed to get underway.

The framework for individual bed bays were made from material usually used to make exhibition stands - because it is lightweight and could be constructed quickly.

ExCeL's existing electrical infrastructure has been modified to ensure the power supply can cope with demand - and not cut out. Temporary generators and oxygen tanks, to supply the beds, have also been installed.

Mr. Hepburn said his team has drawn up an instruction manual to share with other countries taking on similar emergency projects - and people in Australia and Canada have already contacted them.

Where Will the Staff Come From?

The ExCeL centre's suitability for the hospital site goes beyond the functional characteristics of the building.

It is served by public transport links. The nearby London City Airport can be used to bring in supplies and equipment and there is also hotel and university accommodation close by - should it be needed.

It will be led by a team of eight senior staff, drawn from local hospitals and trusts. At capacity, the hospital will need 16,000 staff to keep it running. That will include thousands of doctors, nurses and volunteers.

"The numbers are scary," chief operating officer Natalie Forrest said. "To run one ward, including all of our ancillary staff, we need 200 members of staff."

The nursing staff is being drawn from other hospitals, as well as volunteers from St John Ambulance. Airline staff from Easyjet and Virgin Atlantic have also been approached.

Cabin crews have security clearance and many of them are also first aid trained. The NHS says they would be changing beds, helping doctors and nurses on the wards, and performing other non-clinical tasks.

It will not be a conventional walk-in hospital - only patients already on ventilators will be admitted, transferred from other intensive care units across London. They will stay at the hospital until their course of ventilation is finished.

Support services such as pharmacies and therapy treatment will also be available.

And a mortuary is also included in the NHS Nightingale design. Additional mortuary space is also being found elsewhere in the city, including Wanstead Flats in the Manor Park area of Newham, local residents have been told.

Other temporary morgues are also being set up around the UK, including at an ice rink in Milton Keynes, a crematorium in Ruislip, and at Birmingham Airport, where the hangar facility will initially have space for 1,500 bodies "but will expand to hold more".

Will There Be Other NHS Nightingales?

Preparations are also being made to expand the NHS Nightingale-style hospitals beyond London.

Conference centres in Birmingham, Manchester, Glasgow and Harrogate and the University of West England (UWE) in Bristol have been earmarked as emergency hospital sites to help ease the pressure on the NHS - some of which could open by the end of the month, albeit with fewer beds than London's.

Belfast City Hospital's tower block is being transformed into Northern Ireland's first Nightingale hospital - it will become a 230-bed unit staffed by a team drawn from across Northern Ireland.

An extra 6,000 beds are also being set up in Wales - many in sports and leisure facilities - to take the pressure off hospitals during the coronavirus pandemic.

Among them is the Principality Stadium, in Cardiff, the national stadium of Wales, which will be used as a field hospital for up to 2,000 beds, if needed. 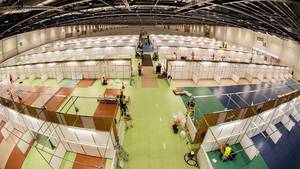