Irregular heartbeat. Shortness of breath. These symptoms are often the first signs of infection in patients suffering from a cardiorespiratory disease. But variations in heart and respiration rate can be subtle, particularly in the early stages of infection. Therefore, sensors that can accurately track small changes in heart and lung activity are of great interest to clinicians – especially during the COVID-19 pandemic.

Yong Xu and his team at Wayne State University and Arizona State University have developed a wearable electrochemical sensor that can record heart and lung sounds with ultrahigh sensitivity. Housed in EcoFlex 00-20, a skin-safe silicone rubber used in prosthetics, the low-cost device could aid diagnosis and long-term management of many cardiovascular and respiratory diseases. The researchers describe their new sensor in Applied Physics Letters.

The 28-mm-wide sensor, designed to be worn on a patient’s chest, uses iodide/triiodide (I–/I3–) redox chemistry to measure mechano-acoustic signals (sounds) from the heart and lungs.

The I–/I3– redox couple is no stranger to motion-sensor technology. Some high-performance seismometers, for example, use iodine-based electrochemistry to convert low-frequency ground vibrations into electrical signals. This is because the current that arises from the redox reactions – the transduction mechanism used to generate the output signal – is extremely sensitive to even the smallest of mechanical motions.

Xu and his team applied the same transduction principles to their device. The sensor consists of a circular cavity filled with an electrolyte solution containing I– and I3–. The cavity connects to a channel containing two platinum anode–cathode pairs. The cavity and channel are topped with a 500 µm EcoFlex diaphragm, which is in contact with the patient’s skin.

When a DC voltage is applied to the two anodes, a current flows between each anode–cathode pair. Both currents are subsequently converted to voltages using a 10 kΩ feedback resistor and an 8.5 nF feedback capacitor. These voltages are then recorded by a data acquisition board and processed to obtain the differential voltage – the final output signal of the sensor.

Because EcoFlex is flexible, small movements in the patient’s chest (like their heartbeat, for example) cause the diaphragm to move the liquid electrolyte along the channel. The movement of the I–/I3– ions relative to each electrode creates a change in current. This change can be observed in the differential voltage signal.

So far, the device has only been tested on one volunteer. Nevertheless, it consistently recorded their heartbeat with a signal-to-noise ratio of over 6:1.

To measure lung sounds, which are much quieter than heart sounds, the volunteer performed a set of five consecutive breathing cycles. Each period of inhalation, breath-holding and exhalation were easily seen on the waveform of the output signal.

The researchers also monitored the volunteer’s respiration rate by processing the raw data with either a high-frequency (20 to 300 Hz) or low-frequency (0.1 to 15 Hz) bandpass filter. The high-frequency filter was used to extract the amplitude of the heart sound signals, which varies as the patient’s chest volume changes during respiration. Meanwhile, the low-frequency filter was used to isolate the low-frequency component of the signal, which corresponds to deformations within the sensor as the chest expands and contracts during each breathing cycle.

While preliminary, the results demonstrate how the sensor could be applied within wearable health monitoring. The researchers envision that the technology could be used for self-management of cardiac diseases like heart failure, as well as to diagnose respiratory diseases like COVID-19. 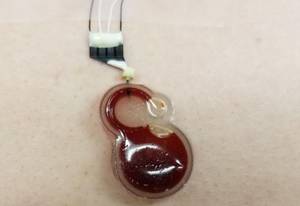 Breast Basics 101: What Every Woman Should Know About Breast Cancer Risk, Screening, & Detection
UP NEXT...
A Practical Perspective on Aggressive Disease Management in NSCLC
CME