About 8.4 billion people — or almost 90 percent of the projected global population — could be exposed to malaria or dengue fever by 2080 if greenhouse gas emissions continue to surge, according to a new study published in The Lancet Planetary Health.

North America is included in that risk area, according to the study, which predicted a potential “northward shift” of both the malaria and dengue-epidemic belts.

Other new malaria-prone regions in that scenario could include northern Asia and central-northern Europe — the latter of which could also be at risk for dengue, the study said.

Socioeconomic factors like housing quality, plumbing, and air conditioning have “meant that dengue poses less of a burden in the U.S. than in other regions with comparable climates,” Erin Mordecai, an assistant professor at Stanford, told The Hill’s Equilibrium.

However, she stressed that “there's always the possibility for dengue transmission with the vectors present and increasingly warm, suitable climates.”

If emissions continue to rise at today’s rates, resultant temperature increases could extend transmission seasons by more than a month for malaria and four months for dengue in the next 50 years, researchers at the London School of Hygiene & Tropical Medicine (LSHTM) determined in the Lancet study.

Yet they also showed how curbing emissions could reduce transmission seasons and “prevent millions of people from contracting malaria and dengue,” Felipe J. Colón-González, assistant professor at LSHTM, said in a news release.

"But policymakers and public health officials should get ready for all scenarios, including those where emissions remain at high levels,” Colón-González said in the release. “This is particularly important in areas that are currently disease-free and where the health systems are likely to be unprepared for major outbreaks."

With the Aedes aegypti and Aedes albopictus mosquitoes — vectors for dengue — present in many regions of the U.S., dengue transmission has already occurred on a local level in Florida, Texas and Hawaii, according to Erin Mordecai, an assistant professor at Stanford.

As far as malaria is concerned, aggressive landscape modification — like swamp draining, electrification, and urbanization — largely eradicated the parasite from the U.S. in the 1930s-40s, Mordecai explained.

“Although increased climate suitability for the Anopheles vectors of malaria could potentially expand their range and abundance, it is unlikely that all this other landscape change and socioeconomic development will be reversed in ways that would make malaria a major problem again,” she said.

The same cannot be said, however, for other parts of the Americas.

In South America, for example, malaria persists and is expanding in areas that are deforested or where gold mining occurs, in the Amazon and other tropical rainforests — particularly in Brazil, Peru, and Venezuela, according to Mordecai.

“This is the region where climate change (combined with land use change) poses the biggest threat for expanding malaria in the Americas,” she said.

But another mosquito-borne pathogen, West Nile virus, has been showing up already this year across the U.S. — with the Colorado health department attributing the increase to the weather.

The role of climate change in its spread is still inconclusive. Transmission also depends on population dynamics and immunity of many wild bird species that host West Nile, Mordecai explained.

From a global perspective, Mordecai and her Stanford colleagues see dengue as the threat of the future, with climate change prompting what they describe as a shift in “disease burden” from malaria to dengue.

Global heating, they argued in a previous Lancet Planetary Health study, will likely limit malaria transmission in sub-Saharan African but also make the region more prone to dengue, due to both urbanization and dengue’s ability to thrive at higher temperatures.

While the other study, from LSHTM, shows how malaria and dengue are expected to expand into higher elevations and latitudes, and into cooler seasons, Mordecai said that it does not “capture the potential decrease in malaria transmission seasons in endemic areas.”

Malaria is transmitted between humans by female Anopheles mosquitoes, with about 93 percent of cases occurring in sub-Saharan Africa, according to the LSHTM study. The global incidence of malaria declined from 2010-2018, aside from a slight increase in the Eastern Mediterranean, the Western Pacific, and the Americas, the study said.

Dengue, meanwhile, is what the authors describe as “the fastest-growing mosquito-borne viral disease in the world.” While dengue impacts 120 countries, most cases occur in the Americas, Southeast Asia, and the Western Pacific

“It's very hard to say what is ‘better’ or ‘worse’ for public health when comparing two diseases with uncertain futures, but we know that malaria currently causes a major burden in sub-Saharan Africa that is declining,” Mordecai said. “The situation is reversed in most of the Americas and Southeast Asia, where dengue causes a much larger burden. In both cases, there is a large disease burden, though malaria is more likely to cause deaths than dengue.”

A malaria vaccine developed by GlaxoSmithKline is currently in Phase III clinical testing, according to the CDC. A dengue vaccine from Sanofi Pasteur is available in some countries, but the WHO recommends only vaccinating those who have had a confirmed previous infection. 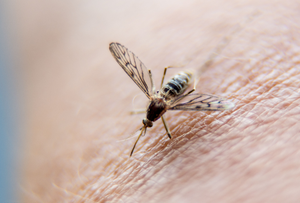 Exploring Therapeutic Updates for Lymphoma
UP NEXT...
TROP2-Directed ADCs in Breast Cancer
CME