Converting genotype information into an interpretable probability value for five different inflammatory arthritis-causing diseases could potentially improve the diagnostic efficiency of rheumatic disease, according to a study published in the May 27 issue of Science Translational Medicine.

Rachel Knevel, M.D., Ph.D., from Harvard Medical School in Boston, and colleagues developed a Genetic Probability tool (G-PROB) to calculate the probability of different diseases for a patient based on genetic risk scores. The G-PROB was tested for inflammatory arthritis-causing diseases (rheumatoid arthritis, systemic lupus erythematosus, spondyloarthropathy, psoriatic arthritis, and gout). After validation on simulated data, G-PROB was tested in three cohorts with 1,211, 245, and 243 patients.

The researchers found that calibration of G-probabilities with disease status was high, with regression coefficients varying from 0.90 to 1.08. Across the three cohorts, G-probabilities discriminated true diagnoses, with pooled areas under the curve of 0.69, 0.81, and 0.84, respectively. At least one disease could be ruled out for all patients; in 45 percent of patients, a likely diagnosis was identified with a positive predictive value of 64 percent. The clinician's initial diagnosis was incorrect in 35 percent of cases. Thirty-nine percent of the variance in final disease was explained by initial clinical diagnosis; after adding G-probabilities, this improved to 51 percent.

"Preexisting genetic data could be considered part of a patient's medical history given its potential to improve precision medicine in the modern outpatient clinic," the authors write. 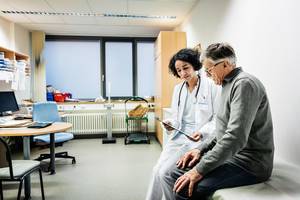