An article published May 20 in Nature Digital Medicine provides a step-by-step plan for an international effort to create a digital twin of the human immune system.

“This paper outlines a road map that the scientific community should take in building, developing, and applying a digital twin of the immune system,” said Tomas Helikar, a University of Nebraska-Lincoln biochemist who is one of 10 co-authors from six universities from around the world. Earlier this year, the National Institutes of Health renewed a five-year $1.8 million grant for Helikar to continue his work in the area.

“This is an effort that will require the collaboration of computational biologists, immunologists, clinicians, mathematicians, and computer scientists,” he said. “Trying to break down this complexity down into measurable and achievable steps has been a challenge. This paper is addressing that.”

A digital twin of the immune system would be a breakthrough that could offer precision medicine for a wide array of ailments, including cancer, autoimmune disease, and viral infections like COVID-19.

Helikar’s involvement has been inspired in part by his 7-year-old son, who required a lung transplant as an infant. This has resulted in a life-long careful balancing of his immune system through powerful immunosuppression drugs to prevent organ rejection while keeping infections and other diseases at bay.

While the first step is to create a generic model that reflects common biological mechanisms, the eventual goal is to make virtual models at the individual level. That would enable doctors to deliver treatments precisely designed for the individual.

“The dream and goal are for it to be used for precision medicine at the level of an individual,” Helikar said. “Importantly, we change over time. Our immune system is programmed, reprogrammed, and tweaked over time. It develops from birth and as we get older, it continues developing, often in ways we don’t like. It becomes weaker, we have cancers and our immune system is not keeping up.  Our goal is to create digital twins that are not just specific to ourselves, but specific to that point in time – taking into consideration all of our past.”

The authors of “Building Digital Twins of the Human Immune System: Toward a Roadmap” are part of an umbrella working group of about 200 scientists organized for multiscale modeling of viral pandemics. The inter-agency working group is led by Reinhard Laubenbacher of the University of Florida and James Glazier of Indiana University, both co-authors of the May 20 report. Since May, Helikar has been co-leading the working group with Glazier.

Other co-authors include Gary An of the University of Vermont, Anna Niakaris of Université Paris-Saclay, and Rahuman S. Malik Sheriff of the European Bioinformatics Institute.

“Digital twins, customized simulation models pioneered in industry, are beginning to be deployed in medicine and healthcare, with some major successes in cardiovascular diagnostics and in insulin pump control,” the article says. “More advanced medical digital twins will be essential to making precision medicine a reality. Because the immune system plays an important role in such a wide range of diseases and health conditions, from fighting pathogens to autoimmune disorders, digital twins of the immune system will have especially high impact.”

While the quest could take years and hundreds of millions of dollars, Hellikar believes it is achievable.

“I think we have enough data and technological advancements in terms of methods and software tools, that the first draft or first version of the virtual immune system could be built with data that already exists. It may not be personalizable yet, but you could start with it as a working prototype.”

Helikar is committed to completing the project.

“As long as there’s a possibility that this can be done, if it can help my son, that’s my mission,” he said. 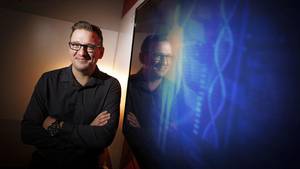