Around 28 million adults in the UK are living with chronic pain. Until recently, many of those patients, including people suffering from arthritis, fibromyalgia, nerve pain, endometriosis, and Ehlers-Danlos syndrome, relied on prescription opioids.

But the dangers of using these drugs long-term can be devastating, with statistics showing that of the 115,000 opioid prescriptions written in the UK each day, five result in death.

As a result, guidelines set by the National Institute for Healthcare and Excellence (NICE) in April said it’s no longer advised that patients should be prescribed opioid medications for extended use. Experts even warned these painkillers can “cause more harm than good”.

It’s left millions desperate for alternative solutions. So could this be the moment medical cannabis finally goes mainstream?

Free from harmful side effects and legally available through private clinics and the NHS since 2018, it has the potential to replace many dangerous, addictive opioid medications – and a range of others besides.

But its remarkable therapeutic capacity is still overlooked, with most doctors not trained in the endocannabinoid system, one of the most important physiological systems in our body, which cannabis interacts with.

Yet the evidence about its benefits is mounting.

There are more than 41,000 studies indicating the safety and efficacy of medical cannabis, with researchers at Harvard Medical School and Boston’s McLean Hospital reporting in March that it significantly reduced symptoms in chronic pain patients.

A 2016 review taking in 10 years of research concluded it is possibly the most effective treatment for fibromyalgia, migraines, IBS, and other treatment-resistant syndromes.

"Exercise and psychological therapies can be helpful, but many people are still left debilitated on a daily basis.

“Fortunately, there’s growing evidence, from lab-based investigations to in-human trials, to support the use of medical cannabis for chronic pain in the right patient.

"This is something I believe has the greatest potential to positively impact the opioid epidemic.”

That’s certainly the belief of many of the UK’s medical cannabis patients, who have found the formerly “alternative” treatment offers much-needed relief, that’s free from risky side effects.

Instant relief from an amazing plant

Mum-of-six Gillian Flood, 39, from Glasgow, has lived with fibromyalgia, a long-term condition that causes pain all over the body, for four years. Since April 2020 she has been prescribed medical cannabis oil and flower.

"In 2017 I was diagnosed with fibromyalgia and was prescribed opioid painkillers gabapentin and pregabalin, both of which made me feel like I was really drunk. I was foggy and forgetful and couldn’t look after my six children.

It wasn’t until I saw a Facebook post on a fibromyalgia page in 2020 that I discovered cannabis was an option. My GP certainly never suggested it. I booked a free assessment at a cannabis clinic and was prescribed cannabis flowers to vaporize or smoke. Within minutes of taking my tailored dose, my muscles relaxed, my nausea subsided and my anxiety lifted.

I experienced instant relief after years of no respite. I wanted to go for a walk with my family – something I couldn’t manage before. I didn’t feel impaired at all, I felt happy and in high spirits, but not stoned.

I’m very well looked after by the clinic and my progress is closely monitored. But despite it helping me so much, the lingering stigma prevents me from being open about it. Some people have commented on how well I seem but I haven’t felt comfortable enough to tell them it’s all down to this amazing plant."

It saved my life... I am now out of my wheelchair and the hospital bed

Student Lucy Stafford, 20, from Brighton has Ehlers-Danlos syndrome (EDS) which has caused her joints to dislocate leaving her in chronic pain since she was 10. She received a medical cannabis prescription in 2020.

"I was first prescribed opioids for EDS when I was 12. By that point, I’d already had multiple surgeries and was getting weaker.

The increasing doses of opioid medications that I continued to take throughout my teens – from codeine and tramadol to morphine – made everything worse.

I couldn’t focus, I was completely wiped out and dropped out of school at 16. When I was 17 I severely dislocated my jaw and was prescribed the highest dose of fentanyl, which paralyzed my gut.

I had to be put on a feeding tube and nearly died. My doctor said he needed to think outside the box and tried prescribing me cannabis on the NHS, but it was denied.

I didn’t know anything about cannabis at the time but I traveled to Amsterdam to try it and found that it made an enormous difference to my symptoms.

When I returned home I started buying and using cannabis illegally. It was so effective I was able to come off all my opioid medications.

But having to undertake criminal activity to get the medicine I needed was horrible – and an unreliable source.

I got a private prescription in 2019, but it cost £1,450 per month. In July 2020 I enrolled in a study called Project Twenty21, which offers subsidized medical cannabis, monitored by Drug Science, to collate evidence about effectiveness and tolerability, in the hope, it will be more accessible on the NHS as a result.

It cut the cost to £450 a month. It’s expensive but so worth it. Cannabis saved my life.

Now, I’m out of my wheelchair and not spending my life in a hospital bed. I have energy and the will to be alive – I didn’t have that when I was on opioids.

If I ever tell people, the first thing I’m asked is, ‘are you high all the time?’, but it doesn’t get me stoned. What it does is give me the ability to live my life, exercise, sleep, have an appetite, and do what everyone else takes for granted.

I’m now on track to get a first in my degree at university, something that would have never been possible without cannabis." 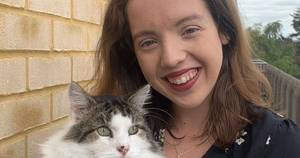 Combatting Breast Cancer with Chemoprevention
UP NEXT...
Beyond the Data: Key Takeaways on Breast Cancer Therapies from SABCS 2021
CME