Announcer:
Welcome to Closing the Gaps in Non-Small Cell Lung Cancer on ReachMD, sponsored by Lilly.
On today’s program, we’ll hear from Dr. Michael Shafique, who’s an Assistant Professor of Thoracic Oncology at the Moffitt Cancer Center in Tampa, Florida. Dr. Shafique joins us to give a breakdown of the KEYNOTE-189 Protocol for non-small cell lung cancer and the impacts it has in practice. Let’s hear from him now.

Dr. Shafique:
So, KEYNOTE-189 was a phase III randomized trial that primarily looked to see if the addition of pembrolizumab to standard of care platinum-based chemotherapy would provide some survival benefit to patients with non-small cell, nonsquamous lung cancer. So the trial randomized patients 2:1, and there were about 600 patients in this trial, and the patients were randomized to either receive carboplatin plus pemetrexed and pembrolizumab or the control arm received carboplatin pembrolizumab. The patients received 4 cycles of this treatment before they continued on the maintenance portion of treatment, which either consisted of pemetrexed and pembrolizumab versus pemetrexed alone, and then patients could continue this therapy for up to 2 years if it was well-tolerated and effective.

This was a very practice-changing clinical trial. The main outcomes favored the addition of pembrolizumab, to the standard of care chemotherapy combination. We saw improvements in median overall survival, and at the last update that we had, the median overall survival was nearly double in the group that received pembrolizumab in combination with chemotherapy. We also saw much better response rates with the addition of immunotherapy to the chemotherapy, and these benefits were seen even though a significant portion of patients crossed over from the control arm to the therapeutic arm or if they went on to receive subsequent immunotherapy upon progression.

Announcer:
That was Dr. Michael Shafique giving us a breakdown of the KEYNOTE-189 protocol. To revisit any part of this discussion and to access other episodes in this series, visit ReachMD.com/NSCLC, where you can Be Part of the Knowledge. Thanks for listening!

Get an in-depth look into KEYNOTE-189, a practice-changing clinical trial in the non-small cell lung cancer field. 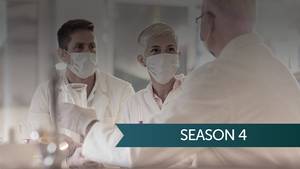 Clinical Considerations in Recurrent/Metastatic Squamous Cell Carcinoma of the Head and Neck
UP NEXT...
New Treatment Strategies for HER2+ Breast Cancer: The Latest from ASCO
CME