On today’s program, we’ll hear from Dr. Jacob Sands, who’s a thoracic medical oncologist at the Dana-Farber Cancer Institute and an Instructor of Medicine at Harvard Medical School. Dr. Sands joins us to discuss lung cancer screening modalities. Let’s hear from him now.

Dr. Sands:
I’m excited to talk to you today about lung screening. This is a technology that has the potential to have a really significant impact on lung cancer mortality. And given that lung cancer is such a significant proportion of cancer-related mortality, this is really an opportunity for substantial change in a lot of lives. So, lung cancer is currently responsible for about one out every four cancer deaths. So, something that can significantly shift lung cancer deaths really ends up having an overall substantial impact on overall cancer mortality benefits. So, I’m going to talk about a few different trials that are important in this discussion. The first one being the NLST, the National Lung Screening Trial, is a study of more than 50,000 people, but half got a CT scan once a year for three years, the other half got a chest x-ray once a year for three years. There was a 20% lung cancer mortality benefit to the CT scan group in that study, and there are a few important things that we pull from that. So, first of all, this was done just for over three consecutive years, so it’s two years; baseline year one, year two. And then there were no other imaging studies that were part of the study. So, on the follow up of years after, there were cancers, of course, detected during that time frame as well. And by doing this over just a few years and then monitoring over many years without ongoing screening, I would argue we see a dilution of some of those benefits because those who, in the later years, get diagnosed with a later stage disease within the screening group, can really impact outcomes. So, important to this discussion is in the screening group, those three years where we had screen detected cancers, 70% of them were stage one, two. In the follow-up years where we were no longer doing the screening, there were still cancers detected during that time. And the cancers detected during that time, rather than the 70% stage one, two, only 37% of those were stage one, two. But we did see that overall benefit, the survival, the lung cancer survival benefit and overall survival benefit, to the CT scan. Now, fast forward many years and just this year, we had a publication of the Nelson Study. This was a study that came out of Europe. This was randomization to either the CT scan or no screening. And similarly, we saw, this difference in the screening group of screen detected cancer staging versus nonscreen detected cancer staging. Now, in this one, the time frame was a little different. As I mentioned, it was 10 years. There was a baseline scan, a 1 year, a 2 year, a 3 year, and a 5.5-year scan, and then there were 4.5 years, of follow up, after that or about; a little bit different with patients. But we saw in the screening group, screen detected lung cancer, 68% of those were stage one, two. In the screening group, those that were not screen detected, only 21% were a stage one, two. So, we see a significant shift in stage. Lung cancer mortality improved with CT scan, it was a 26% benefit by lung screening. There have been publications showing that if lung screening was done for everybody who qualifies, we would expect to save about 48,000 patient’s lives per year. This is a huge number. To put that into context, that is more than the number of people that died from breast cancer each year. Now we want to cure all of them, but this is how big a benefit lung screening potentially is.

Announcer:
That was Dr. Jacob Sands sharing the latest screening modalities for lung cancer.  To revisit any part of this discussion and to access other episodes in this series, visit ReachMD.com/NSCLC, where you can Be Part of the Knowledge. Thanks for listening!

Thanks to recent advances, this screening technology has the potential to have a significant impact on lung cancer mortality.

How Can We Prevent the Delayed Diagnosis of Type 1 Gaucher Disease?
Jennifer Caudle, DO 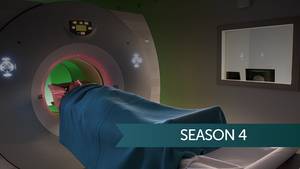 How Can We Prevent the Delayed Diagnosis of Type 1 Gaucher Disease?
UP NEXT...
Expanding NCCN Guidelines for mCRC Care
CME