On today’s program, we’ll hear from Dr. Michael Shafique, who’s an Assistant Professor of Thoracic Oncology at the Moffitt Cancer Center in Tampa, Florida. Here are Dr. Shafique’s insights on key findings from the REVEL trial, which focused on a second-line treatment approach for non-small cell lung cancer.

Dr. Shafique:
So the REVEL trial was published in 2014, and it was primarily a second-line study of patients both with squamous and nonsquamous non-small cell lung cancer. The patients included in this study all had progressed on prior platinum-based chemotherapy. And this was a trial about 1,200 patients who were randomized to receive either docetaxel by itself or docetaxel plus ramucirumab, which is a VEGF inhibitor. It’s in the same family as bevacizumab. And this clinical trial primarily showed an overall survival benefit with the addition of ramucirumab to docetaxel. The overall survival benefit was positive, but it was modest. It was about a month to a month and a half of overall survival benefit.

You know, the important thing to remember about the REVEL trial is that it was published and was really under consideration as a second-line therapy around the time that we began seeing positive results from clinical trials with nivolumab and pembrolizumab in the second-line setting as immunotherapies, so the combination didn’t really catch on as much as a second-line therapy at that point, but I do think we’re seeing a resurgence in the use of this combination as a second-line therapy, particularly in the group of patients who are progressing on combination chemo plus immunotherapies as a first-line treatment. We don’t really have a great next-line option in these patients, and even though the REVEL trial never looked at this group of patients, it’s finding its way back in our treatment algorithms as a potential second-line option. The response rates are somewhere on the order of 20–30%, so it does offer a good therapeutic option for patients in the second-line setting who have progressed on prior chemotherapy plus immunotherapy combination.

I think the important things about the REVEL trial are just to understand a little bit of this toxicity profile as well. I think I reserve that option for patients who are in a very good performance status mostly because we see issues with neutropenia, febrile neutropenia, neuropathy, and the ramucirumab can cause issues with protein loss in the urine as well as high blood pressure and bleeding issues, so I do think it’s an effective combination but certainly something that I would have a clear discussion and use in patients with a very good performance status.

Announcer:
That was Dr. Michael Shafique discussing important takeaways from the REVEL trial. To revisit any part of this discussion and to access other episodes in this series, visit ReachMD.com/NSCLC, where you can Be Part of the Knowledge. Thanks for listening!

What implications does the REVEL trial have on our approach to treating non-small cell lung cancer patients? 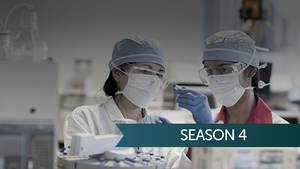 From Silent Killer to Treatable Disease: Improved Detection Methods for Ovarian Cancer
UP NEXT...
An Overview of RET Mutations in NSCLC
CME