On the Forefront of NSCLC Treatment: Targeting RET Mutations

On the Forefront of NSCLC Treatment: Targeting RET Mutations

Dr. Rangachari:
RET gene rearrangements are sort of the newest kid on the block as it relates to an identifiable subgroup of patients with lung cancer who now have an actionable genetic target, meaning we know the target and we have an appropriate therapy. We know that about 1–2% of all patients presenting with advanced-stage non-small cell lung cancer will have presence of an identifiable RET gene rearrangement. For the most part, these are going to be almost exclusively patients with adenocarcinomas as opposed to patients with squamous cell lung cancers, for example.

We’ve known about RET gene rearrangements for some time, but what we’ve struggled with is applying both an effective and tolerable therapy directed against this genetic alteration.  Previously available oral targeted therapies that have been explored in the clinic are what we consider multitargeted therapies or therapies that were capable of hitting RET but also hit a lot of other targets as well, and as a result, response rates with use of those drugs have been historically low with response rates measuring in the 20–30% range and with a high degree of off-target toxicity including cardiovascular toxicities, which are poorly tolerated in our lung cancer patients often due to their own preexisting comorbidities, age, etc.

Very excitingly, there has been approval of a novel RET-specific targeted therapy which has shown both much higher efficacy response rates that are 2–3 times higher than historical controls as seen with use of other prior targeted therapies in this population and with much better tolerability in terms of efficacy. I think the clinical significance of RET as of this moment is that it’s on the short list of actionable genetic alterations that are known to be found in patients with lung cancer that need to be identified at initial diagnosis of advanced-stage disease and for which there is an effective and tolerable targeted therapy now available in the clinic.

Announcer:
You’ve been listening to Closing the Gaps in Non-Small Cell Lung Cancer, sponsored by Lilly. To revisit any part of this discussion and to access other episodes in this series, visit ReachMD.com/NSCLC. Thank you for listening to ReachMD. Be Part of the Knowledge.

With newly approved therapies on the rise, the way we treat non-small cell lung cancer patients with a RET gene rearrangement may be evolving. 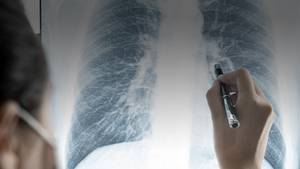 Part I: Precision Medicine in NSCLC—Implications for Molecular Testing and Treatment
UP NEXT...
A Practical Perspective on Aggressive Disease Management in NSCLC
CME