Announcer:
You’re listening to Project Oncology on ReachMD. On this episode, sponsored by G1 Therapeutics, you’ll hear from Dr. Jacob Sands, a Thoracic Medical Oncologist at the Dana-Farber Cancer Institute and an instructor of medicine at Harvard Medical School.  Dr. Sands will share insights on chemotherapy-induced myelosuppression and its impacts on patients with small cell lung cancer. Let’s hear from him now.

So, myelosuppression happens with chemotherapy because essentially the chemo kills cells that are really rapidly growing and dividing. That’s kind of just a very basic statement. Now, for the most part, the cells that are growing so rapidly are cancer cells, and therefore, the chemo more selectively hits those cancer cells, but the cells in our bodies that are rapidly growing and dividing, are also most susceptible to that, and really that is the bone marrow, in particular. Of course, the lining of our GI tract can also be affected, which is why nausea is historically also another side effect. Now thankfully, we have a lot of anti-nausea medication that has really improved, and therefore nausea’s not nearly the problem that it used to be. Myelosuppression is still an issue, and this is often a limiting factor as to the dosing. This is something that we check every time we’re about to give the next cycle. And in some cases, can really require dose reductions or dose delays, to allow for the bone marrow to fully recover.

So, on top of the dose delays and dose reductions that can happen really this can result in some symptoms for patients as well. Now, first of all, to talk about that dose delay and dose reduction, the treatment that we’re giving patients is really obviously to treat the cancer, and the more aggressively we can hit that cancer, the more effectively we can treat it. Now, dose delays and dose reductions are part of the recipe, so to speak. So, I do say to patients, “Hey, when we have to delay, you know, this is just part of the balance of treating the cancer while not harming you in the process, and sometimes we walk a fine line there.” To be able to really dose the chemo as much as possible potentially has an effect on how much the chemo works as well. So, to be able to reduce the reductions, or to limit the dose reductions and to limit dose delays may lead to better outcomes in some of these patients.

Now, it’s hard to say, specifically around certain dose reductions and how much of an impact that makes overall, but we certainly know from other studies, where we look at combination chemo, where we give two drugs versus one drug that in some of these we might be better off by reducing the toxicities and therefore giving an easier regimen. And what was seen in that study is that patients actually did better with the two-drug regimen because treating the cancer really impacts outcomes in some cases, more so than even the toxicities, in a general statement. Obviously, sometimes toxicities can be a big issue, but the undertreatment itself can also lead to worse outcomes. So, by being able to maintain blood cell counts, and to be able to maintain the more aggressive dosing, that can have an impact on outcomes.

So, there are a few different ways, now, that we can really reduce myelosuppressive events. One is, as mentioned, the dose reduction or dose delay, depending on patients’ labs at the time of that next cycle. And in some cases, if there’s someone who’s really borderline functional status, it is really consideration of actually initiating therapy, at a little bit of a dose reduction, if I think that someone is truly, really fragile and we’re kind of borderline discussing whether or not to start treatment, and that’s not commonly something I do. I really try and give full dosing, but that is a consideration.  GCSF is a way of preventing prolonged neutropenia, and so this has been around for a while now, and there is actually even a way of putting that on as a sticker on someone’s arm so that when they go out, it actually gives them the dose the following day.

And then more recently, there’s a drug called Trilaciclib, which is more preventative of myelosuppression, and that’s for all three lines – for white blood cells, for red blood cells, and for platelet counts. Now, this drug, I’ve found it particularly useful in patients who have had any issues with anemia or thrombocytopenia. Now,  this has actually most obviously worked in the patients I’ve seen has really been most helpful in patients who are on some kind of blood thinner, and had deep thrombocytopenia, or prolonged thrombocytopenia with chemotherapy, and this has really worked very well in preventing  that reduction in platelet counts so that they can continue the blood thinner and not worry too much about bleeding.

Announcer:
This episode of Project Oncology was sponsored by G1 Therapeutics. To access this episode and others from this series, visit ReachMD dot com slash project oncology, where you can Be Part of the Knowledge. Thanks for listening!

What do we need to know about bone marrow suppression from chemotherapy—and how can we manage these events? 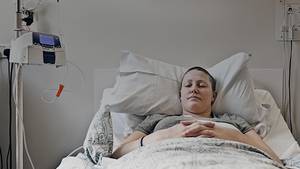