Dialogue with the Experts: Best Practices in NSCLC

Richard is a 48-year-old Caucasian lung cancer patient coming in for his second round of therapy. He first received oral chemotherapy with a platinum-based regimen. Richard reported forgetting his medication from time to time.  It is possible that his low adherence to his regimen may have contributed to his disease progression.  You had made sure to give Richard and his wife several pamphlets about his disease and his therapy to reduce the risk of low adherence.

This time, Richard is receiving his second infusion with an anti-PDL1 infusion therapy.

Your nurse talks to Edward about how he is feeling. Upon taking his weight, it is noted that he lost 8 pounds since the last visit. The nurse then asks what kinds of symptoms have been affecting his life since he started the PDL1 inhibitor. Richard explains that he is feeling a little tired but it does not affect his normal routine; he also reports occasional constipation. His wife adds that he isn’t eating, which, he explains, is because he is continuously nauseated. The nurse proceeds to grade the adverse events, using the MeDRA nomenclature and grading criteria. At this time, Richard is experiencing Grade 2 and 3 A, and assigns Richard a score of 2.5. You counsel Richard on how to best handle these symptoms.

As Richard lost weight, feels constipated and nauseated, the nurse asks “Please tell me what you eat during a normal day“. Richard’s wife responds for him. “He doesn’t eat any of the meals I make; he mostly eats bland food such as crackers, chips, or sandwiches.” The nurse recommends that Richards eats his biggest meal of the day at breakfast, since he does not feel nauseated at that time. She also recommends staying away from fatty foods, especially butter and peanut butter oils, and instead eat high-fiber foods such as beans, lentils, fresh or canned vegetables, and fresh or dried fruit.  She suggests that he eat spinach and other dark green vegetables, and to drink at least 10-16 oz of water during each meal.

As Richard and his wife proceed into the treatment room, you notice the smell of cigarette smoke on Richard’s clothing. During a past visit, you had already told Richard that he should quit smoking, and at the time, he had said “Oh, I don’t know. I have been smoking for over 30 years and so does my brother, and he doesn’t have cancer.” You responded by telling him “You need to try.”

Today, you ask “How is quitting going?” Richard’s wife responds, with tears in her eyes, “I keep reminding him, but he is not stopping. I hide his cigarette packs, and somehow, another one just shows up.” You have decided to convince Richard that he must stop smoking, and to tell him frankly. You say, “Richard, this needs to stop. Your cancer is likely a result of your smoking habit. Smoking will reduce the chances for chemotherapy to work, and if we eradicate your cancer, it might come back because you did not stop smoking”.  Richard says that he will try and use the strategies discussed. You tell him that you do not trust him entirely and that you will reassess at the next visit. You give his wife some patient information about keys to quitting smoking.

You mention that you would like Richard to undergo a MRI. At this point, his wife looks worried. “As you know, we live in Northern Mississippi with limited transportation. It is already so difficult for us to come here, I don’t know where, when and how we can get this done”. You ask your assistant to print addresses for imaging centers near Richard’s home. You leave Richard with the nurse as his infusion is initiated.

5
5
Lung Cancer is the leading cause of cancer death and the second most diagnosed cancer in both men and women in the US.  Incidence rates vary from sta…
5 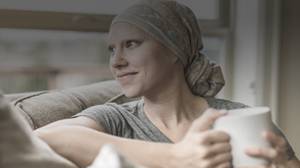